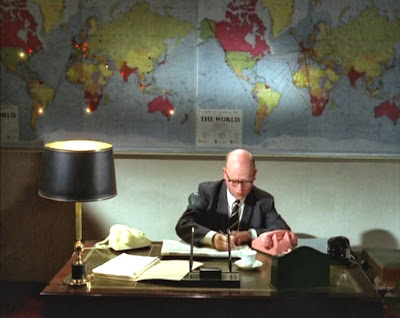 You would think that the man sat behind the big desk was a man of some importance, that he is one of the "big wheels" in the machine. A large map of the world upon the wall behind him, the lights illuminating a number of cities around the world. And there this man sits, pen
in hand, paper work, and an open file upon his desk. I've no doubt at all that the man, who is without name, is working on some matter of urgent importance. I'm not so sure about the pink phone though, and there were no biscuits for his elevenses........there is no teaplate under the cup and saucer this time! 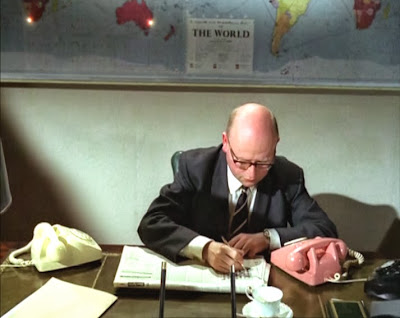 But no, the man's not busy at all, he's filling in either The Times or The daily Telegraph crossword! But I suppose he's entitled to if he's on his teabreak, any longer than ten minutes and he's back on government time. I used to wonder what this man was. I think him to be a first contact, a glorified receptionist of some kind who works alone in the outer office! A small cog in the machine, who is at the beck and call of everyone in the department!

BCNU
Posted by David Stimpson at 08:28