Its A Question Of Murder by our own reporter 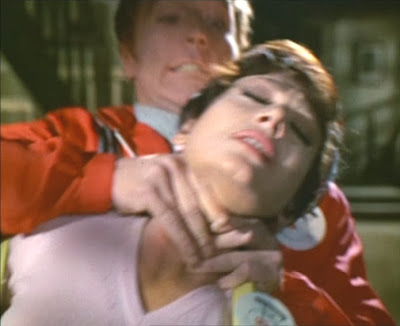 This picture was taken from the department of Visual Records. It shows No.8 with his hands around 22's neck, this in the act of strangulation! The Tally Ho has learned of the brutal murder of No.22 by a psychotic, paranoid murderer - No.8. Apparently an experiment was being conducted using hallucinatory drugs during some "virtual reality" play role game involving No.6 and No.2. It is not known if No.8 himself had been taking these drugs as it is understood that no autopsy has been carried out on the body thus far.

What has been revealed is, that during the "Virtual Reality" experiment, No.8 became emotionally attached to No.22 who was palying the role of Cathy - a saloon girl, and No.8 had the role of the Kid, a psychotic killer who became jealous of Cathy's attachment to the man with no name-No.6. And so if he, the Kid, could not have Cathy then no one would. And it seems that No.8 carried his character over into the real world, as he strangled No.22 with his bare hands.
No.8 could not be called to account for this brutal murder because he then committed suicide by throwing himself off a balcony. Driven to suicide as he was by the Judge-No.2. No.8's last words being "Keep away from me Judge, keep away. I'm getting no more.......not going to hit me.... no more. No mo...re." was No.8's dying scream.
This is of course not the first time that a citizen of the village has been driven to suicide. There was No.73 who committed suicide by jumping out of a hospital window.
As if it wasn't bad enough for No.2, how No.6 was able to distinguish between fact and fiction, and he would have to pay for this failure. But there is also the murder of No.8 to be brought into account.

Your own reporter
Picture from Visual Records
Posted by David Stimpson at 08:17