The Man With X-Ray Eyes! 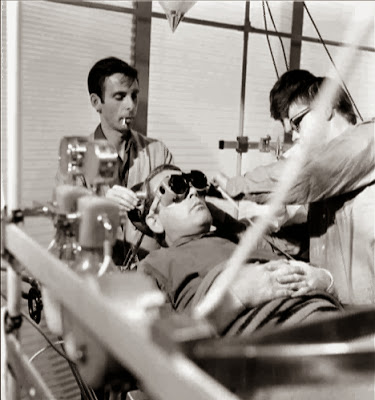 As you can see No.6 is being prepared for a continuation of a medical experiment by medical technicians. You will pay careful observation to the stringent cleanliness of this sterile environment!

This is the latest medical experiment, in a long line of medical experiments conducted by the doctor No.40, working in conjunction with his female counterpart No.22. The experiment being conducted is with No.6's eyesight. This after an operation to remove a cataract from No.6's left eye, after which there was an instant improvement in the subjects eyesight. The operation itself saw the use of a new bio-optic drug, which washes, rinses after burning away unwanted tissue.
After the operation No.6 was laid up in the hospital for observation. During this time No.6 developed an uncanny knack of telling matron, well soon after he concentrated on the nurses, telling them what colour underwear they were wearing! the patient had developed X-Ray vision!
It was soon after this that further doses of the bio-optic drug were administered to the patient and further improvement of the patients eyesight, this to the length that the patient could see, not only through nurses clothing, but also through their skin to their very skeleton foundations. Diagnosing tumours, bone cancer, and a chronic condition of the liver! To try and help the patient adjust, he has been wearing thick black, lead lined welding goggles. This so that the patient can gain relief from his X-Ray vision, but with every dose of the bio-optic drug, he can see more clearly to the point when blacker and thicker goggles have been required.
Soon after long series of doses of the bio-optic drug the patient was seeing through walls, into the ward and beyond, far beyond the hospital through the village into the bright white light beyond.
"What can you see No.6, we must know" both doctors demanded.
"We have gone as far as we dare!" No.2 warned.
"I can see bright white light. It's blinding."
"Where is this white light?"
"There is movement within the light, shadowy figures with no substance, like ghosts."
"Who are they?" shouted the doctor-No.40.
"They have no names, they have but numbers...... they are our future........"
"What's happened?" No.2 demanded, with one eye on the patient and the other on the over-sized red telephone.
"He's collapsed!"
To date it is unknown whether or not the effects of the bio-optic drug can be reversed. The patient is now being kept continually sedated, for fear he may pluck out the eyes which now offend him.

Photograph via visual records.
Posted by David Stimpson at 07:59