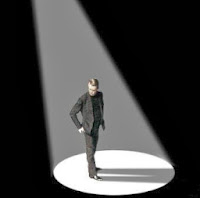 There are many characters within the Village, but none greater than the following three.

The - Angelo Muscat gives a masterly portrayal of the , whose appearances in the Prisoner series is perhaps only second to that of McGoohan himself. Never heard to utter one single word, it is believed by many that the was indeed mute. Although there is absolutely no evidence for this presumption. Perhaps he has nothing of interest to say. But who is that speaking to No.2 on the telephone in ‘A B and C’ when no.2 says "Is he? Send him in." And there at the command was the showing No.6 into No.2's office.
The is loyal, serving each new No.2 without question, but what his thoughts might be regarding some of his masters, well one can only speculate.
He is quick to realise what was taking place in the embryo room of ‘Once Upon A Time,’ soon to decide which the winning side would be. And quick to join in the violent and bloody revolt of ‘Fall Out.’ And he knew about the Scammell Highwayman Transporter!
No.2 - Leo McKern is probably every Prisoner fans favourite No.2, and there is certainly a rapport between himself and McGoohan which perhaps none other share. A masterly performance during 'The Chimes of Big Ben,' helps see his return for ‘Once Upon A Time’, after which Leo suffered a nervous breakdown, swearing he would never return to the Prisoner again, although he did, for ‘Fall Out,’ looking and feeling like a new man!
This is a confident No.2, who doesn't want No.6 to become a man of fragments. And he knew that the plan of ‘The Chimes of Big Ben’ would not work. He told Nadia that.
He's charming, efficient, and is as persuasive and manipulative as they come. And is always one step ahead in the game, in that he knows exactly what No.6 is up to. And if he can't see that for himself, he has Nadia to help keep him informed.
And finally, that laugh of his - it's very contagious!
The Prisoner-No.6- No.1 - Patrick McGoohan. Not so much a character, more of a driving force I should have said! Because when you speak or write of No.6's character, you have to incorporate the of McGoohan because their characters are one and the same. Strong, determind, single-minded perhaps. But a man who gets things done, and knows just how he wants things done.
The Prisoner-No.6, a man of steel, who fights to maintain his identity, the right of the individual to be individual. Rejecting both his number and the village, swearing that he'll escape and come back. Come back, wipe this place off the face of the Earth and No.2 with it! He survives the ultimate test of ‘Once Upon A Time,’ only to reject the offer of ultimate power, escapes the Village, but at the same time remains just as much a prisoner as ever he was.