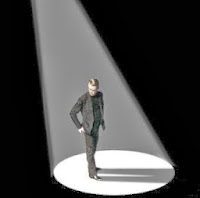 It’s easy to stop that nasty over heating which Mrs. Butterworth was experiencing with her Lotus 7 in traffic, and I mentioned this to a mate of mine who told me how easy it was to rectify the trouble...... take that number plate off the grill, its obstructing air flow to cool the engine!

Then of course there was that moment during ‘Hammer Into Anvil’ when during an interrogation session with No.6, he pulled out that sword from his "sword shooting stick" and waving the tip of the blade in front of No.6's eyes duly prodded No.6's forehead with the tip of the blade, you can actually see the indentation it made. "Ah you react!" said No.2 with a sense of satisfaction. Well who bloody wouldn't, I ask you!
In ‘Arrival’ No.6 asks the electrician, who has come to replace the busted loud speaker, why he drives those things.... the tractor, a bit slow! "In an emergency we walk" the electrician tells No.6. Mind you, even though those little tractors are a bit slow, their mighty powerful machines. I saw one in ‘Dance of the Dead’  pulling a trailer with three maids aboard, and they were going up hill. And have you noticed those taxis, Austin Minimokes they are, and the drives, all be it females, are not that much different form how taxi drivers were perceived to be, always talking the roundabout route!. Well the Prisoner was at the electronic free information board when this taxi pulls up.

"Where to sir?" the female oriental driver asks.
"Take me to the nearest town" the Prisoner requests.
"Oh we're only the local service" the driver replies.
"Take me as far as you can" says the Prisoner.

Well the driver certainly does that, up road, down street. Up and back the same way twice, and the longest way round to get back where you started! But at least it didn't cost him anything, and the viewer did get a grand tour of the village. But in ‘Free for All’ the taxi ride was somewhat different as No.6 was being interviewed by the reporter No.113. For as the interview had commenced, the taxi slowly drove along the street down towards the Town Hall passing buildings on the left. Yet as the interview progresses the taxi can be seen passing those very same buildings a second time. Well that street isn't very long down to the Town Hall, and the taxi would have arrived before the interview had been concluded otherwise.

So they hadn't burnt the Prisoner’s suit after all, and the doctor in ‘Arrival’ told him they had! they had given to that patient to wear, the bald headed on with cigarette papers stuck on his scalp! Yes and during ‘Dance of the Dead’ the Prisoner’s suit was specially delivered to him for the occasion of the ball that evening. But then they must have taken it back again soon after the ball of ‘Dance of the Dead,’ because it was waiting for him on that dummy in the cloak room in ‘Fall Out.’

"We thought" said the supervisor-No.28, "that you would be happier as yourself."

And those Juke Boxes along that passageway, one of which used to be found in my local cafe back in the seventies. Were they all really playing that Beatles song "All You Need Is Love?" And while we are on the subject of that underground passage way. The , he seems to know more about what's going on than he lets on. I mean how come he's got the key to the welcome door? I've just watched the footage of the three of them walking along that underground passage way, and I didn't see the Supervisor hand that key to him. So the butler must have had the key in his pocket it all the time. Which only confirms to me that the knows much more about the Village and what goes on than he admits to. Not that the butler admits to anything!

And that door which the butler unlocks and opens into the cavern, the words COME are on the opposite side of the door which means the Prisoner, butler and supervisor are not being welcomed into the cavern. So seeing the words of COME are on the cavern side of the door, people are being welcomed to the village. Suggesting another way in which people are brought to the Village other than by helicopter. Probably the way the milk, the potatoes, the ice cream and aspirins arrive at night!
And then there was that assassination plot during ‘It’s Your Funeral,’ that bomb concealed within that "seal of office" hung about the head and shoulders of the retiring No.2. Did the assassins, or rather those involved with this assassination/execution, really think that the retiring No.2 would have been the only one to die, or at least be injured if not fatally so? No, all the lives of those standing on that balcony, the Top-Hat officials and the heir presumptive, and not forgetting the butler. Certainly blood, brains and guts, bone and human flesh would have been everywhere and over those citizens gathered below the balcony of the Gloriete. Had the bomb actually been detonated, panic would have reigned supreme!
Looking at ‘Living In Harmony’ again, I grow more and more positive that we are seeing the first Reality Role playing game. In the way that none of the action is really taking place, only in the mind of No.6. And in the way microphones are used, cardboard cut-outs, and how the action takes place with only No.6 actually in the town of .
The exploding lighthouse as seen in ‘The Girl Who Was Death’ is actually stock-footage from Thunderbirds.
There are numerous aspects to the Prisoner series, including pornography! Yes, just take a look at one of the cabin walls aboard the gun runners boat in Many Happy Returns, pictures of semi naked girls!
Why? Well ask your computer, bet it doesn't blow up, mine didn’t, nor does it want its own trade union! As suggested by No.2 during ‘It’s Your Funeral’ when No.2 asked;

"What are the percentages of right and wrong!"
"I'm afraid we don't know that" No.8 replied
"Why not?"
"Twice we programmed our machines for a parental appraisals of their own efficiencies. Each time they refused to give back the requested information."
"Refused?" How?" asked a stupefied No.2
"Simply by not returning the data to us!"

Temperamental these machines apparently! So just when did the Professor and his wife arrive in the village? I only ask because I believe that the Professors wife new No.2 of ‘The Chimes of Big Ben.’ Well there's a bust of that particular No.2 in the drawing room of the Professors house! I only mention it, because such a bust, and others like it, appeared in the exhibition of "Arts & Crafts."
Much of the pottery, cups and saucers, salt and pepper pots used in the Prisoner are actually Portmeirion pottery called .
And finally have you noticed the similarity between the poster used in ‘A Change of Mind’ and that of the WWII Lord Kitchener poster?