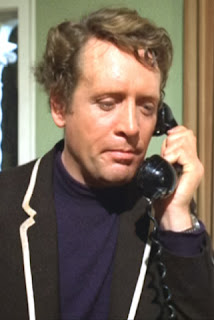 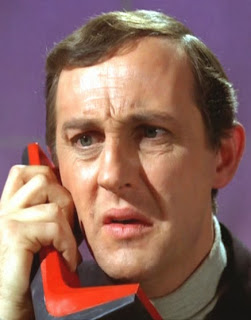 "Get me Number Two......Curtis here."
"Password?"
"Schizoid man. Number 6 is dead....Rover got him."
"What?!"
"Yes I know, I'm as cut up about it as you are!"﻿
"How did it happen?"
"Well he just snapped, I tried to stop him, but he went running off."
"Didn't he give the password?"
"Yes, but it must have been the wrong password."
"Well you'll have to take his place!"
"Take his place?"
"Yes. You know everything about Number 6, you're his exact double. You've been impersonating him for the past six weeks or so."
"I don't think so!"
"What do you mean you don't think so? My neck's on the block here!"
"Nothing to do with me, besides Janet will be expecting me."
"Janet, who the hell's Janet?"
"His fiancee, daughter of Sir Charles Portland, haven't you read my file?"
"What's this got to do with anything?"
"Well if I'm to go on impersonatimng Number Six........"
"Here, you'll carrying on impersonating Number Six here in the Village"
"But I'm not Number Six, besides I haven't resigned or anything!"
"Well imagine you have and we'll take it from there! And no-one will be any the wiser!"
"You can't do this to me!"
"I've already done it. Think yourself as the Prisoner of the Village, you know, like 'The Prisoner of Zenda. But you have to take the place of Number Six."
"I am not a number...........I am a free man!"
"Yes that's the spirit. You carry on like that and we'll get along famously!"

Be seeing you
Posted by David Stimpson at 09:06