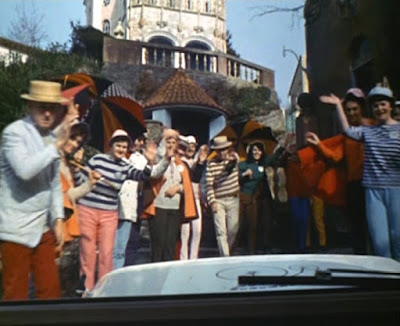 Or not as in this case! Because these good citizens cheering Number 6 during the election, are not wearing voting favour rosettes! You might say that they have removed them in order to vote, but voting has yet to take place, as the election is not yet over, there are speeches yet to come! Perhaps these are the “don’t know” section of the community!

A Touch Of Déjà vu! 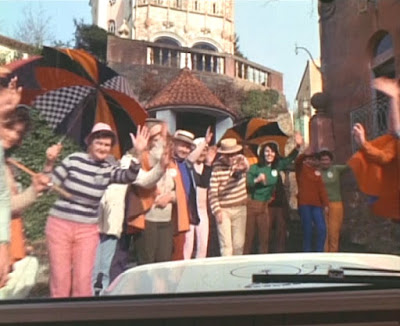 “I say, have any of you the feeling we’ve done this before?”
“What do you mean?”
“I mean stood here cheering like this.”
“Have we?”
“Yes it was during a scene for the election.”
“Isn’t this that scene then?”
“No it can’t be, some of us aren’t in the exact same place we were then.”
“I am, I remember standing next to you.”
“Yes and I’ve got my right arm held out in salutation!”
“So have I.”
“I don’t remember that chap in the dark blazer and straw boater before!”
“That’s because you couldn’t see me. I was standing behind this lady in the cape and brown slacks.”
“So if this isn’t the election, why are we cheering?”
“Weren’t you listening to what the director said, it’s because Number 6 is on his way home from the hospital.”
“That’s not the way home from the hospital!”
“Who cares, just keep waving and cheering, and think of the money.”
“Never mind that, we’re going to be on television, in the most famous television series ever made!”
“Yes, twice if this is anything to go by!”