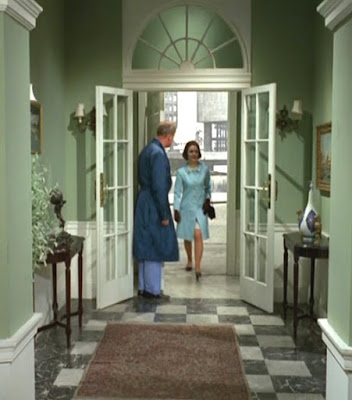 They say every picture tells a story, and that is true of the picture on the left, taken from ‘Do Not Forsake Me Oh My Darling.’

Janet Portland just happened to be passing by No.1 Buckingham Place, when she saw her fiancés Lotus Seven parked outside the house. Excited she mounted the steps and rang the door bell. To her disappointment the man standing in the hallway is not her fiancé!
She points out his car, and asks the man standing in the doorway if he’s back. “Is he with you?”
The man doesn’t quite know what to say for a moment, then says “Yes.”
Janet steps over the threshold into the hallway calling out “Darling.”
The man closes the door as Janet moves along the hallway again calling out ‘Darling,’ then goes upstairs thinking he must be in his bedroom. Fine, there’s nothing wrong with that, it’s what we see and hear. However there is something wrong with the picture. 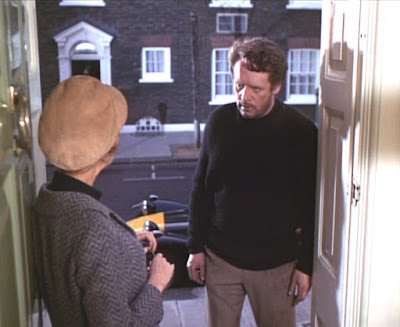