Rover-Droid! by David A. Stimpson

One day Numbers 231 and 217 were clearing out the back of the supply warehouse.
Here Two-three-one, what’s that?
What’s what Two-one-seven?
This thing here under the tarpaulin?
Oh, I’d forgotten about that!
What’s under the tarpaulin?
Pull the sheet off if you’re that interested.
It takes but a moment to pull the dusty tarpaulin sheet off the vehicle underneath.
What is it?
Rover mark one.
Rover mark one, what’s that?
Well it’s a little before your time, but before the Rover that we know, we had this machine as The Village Guardian!
It’s not activated is it?
No, it was decommissioned a year or so ago. To be perfectly honest it wasn’t that successful.
Why not?
It was supposed to be an all terrain droid, on land, on the sea, underwater, and be able to climb steps, scale walls. It has a blue flashing light.
What like a police car?
More than that, the blue light was able to have such an effect that it observed you into the machine.
Ha ha ha ha ha ha ha ha ha ha ha ha ha don’t make me laugh!
No its true man......................what’s that?
What’s what?
That whirring sound.
I don’t hear any whirring..........don’t move, keep perfectly still.
Why, what’s up?
I don’t want to worry you, but I think Rover Mark one has just re-activated itself!
That’s crazy.......oh my God, it moved.
Moved?
It’s turned towards us.
Is the blue light flashing?
I don’t know, I daren’t look! 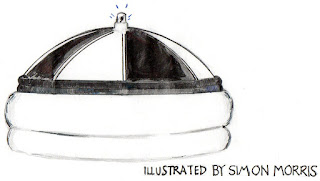 
Later in the warehouse a foreman appeared on the scene.
Oi, Two-three-one and Two-one seven, where are you pair of idle layabouts? I’ve a list as long as your arm for properties for 89 Private. What the devil.......................Aghhhhhhhhhhh
In Number 2’s office the yellow telephone begins to bleep.
Two here.
Supervisor here.
Yes what is it, what’s the matter?
Two workers and their foreman who work in the supply warehouse have disappeared.
Impossible! Look again for them.
We have sir, twice, there’s no sign of them. What’s more there’s a piece of equipment that has gone missing as well.
Equipment, what piece of equipment?
Rover mark one, the Rover Droid, it’s reactivated itself!
Can it do that?
It’s not supposed to. I remember when it was first used it went berserk! If it’s got out of the warehouse no-one will be safe. Can you hear a noise Number Two?.................Number 2 are you there?