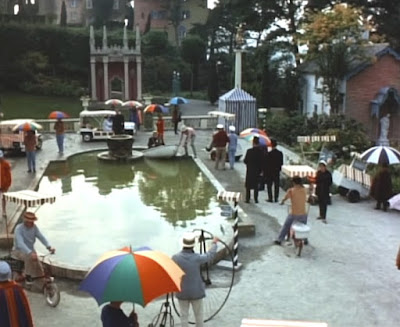 “Do you know what Fifty-One?”
“No Eighty-Two.”
“I’ve just had a touch of the déjà vu’s!”
“How do you mean?”
“Did you hear the word to be still?”
“No.”
“Neither did I.”
“What are you going on about?”
“The Guardian is just passing by.”
“What like the court of King Caractacus?”
“What?”
“You know the court of King Caractacus was just passing by……”
“Never mind that. Do you play chess?”
“Yes.”
“Well there’s going to be a game of chess played with human chess pieces.”
“Is there, where?”
“On the chessboard?”
“What chessboard?”
“Precisely!”
“Whatever are you going on about?”
“There’s something strange going on in The Village. There’s no chessboard set up on the lawn. No human chess pieces about to take up their squares on the chessboard.”
“So?”
“This is ‘Checkmate,’ chess runs throughout this episode.”
“I don’t get it.”
“And yet here we are in a scene which actually takes place in another episode altogether, ‘Arrival!”
“Don’t be daft!”
“Well where are we going?”
“We’re on our way to the Town Hall.”
“Who is that over there in the dark suit?”
“He must be a new arrival.”
“How do you make that out?”
“He’s wearing a suit.”
“That’s nothing to go by, so are we!”
“And yet here we are in that exact same scene, yet in an altogether different episode, how do you account for that?”
“Déjà vu?”
“It’s worse than that! We are in the fifth dimension beyond that which is known to man. It is a dimension as vast as space and as timeless as infinity. It is the middle ground between light and shadow, between science and superstition, and it lies between the pit of man's fears and the summit of his knowledge. This is the dimension of imagination. It is an area which we call the Twilight Zone.”
“Someone’s going to have to tell Number Two, he’s not going to like that!”
“If scenes like this keep getting mixed up in other episodes, we might not get to the Town Hall.”
“How do you mean?”
“Any moment we might find ourselves in a different scene from another episode, perhaps sat at a table together on the lawn of the Old People’s Home drinking tea!”
“I remember that scene, I asked for biscuits and didn’t get any!”
“I had to sit there wearing Inuit snow glasses!”
“I don’t remember it snowing!”
“It didn’t!”
“Ah, that would explain it then!”
“What would explain it?”
“It never snows in the fifth dimension!”
“And it never rains in The Village, but that doesn’t stop people carrying umbrellas!”
“We’re not carrying umbrellas.”
“That’s because it’s not raining!”