No.6 having been sentenced to death makes a run for it with the screaming mob close on his heels. He runs long the corridor and into that room behind the pair of French doors into a small anti room, through another pair of French doors and into the room beyond. Then through that room and into the small mortuary, there is another door which he opens, yet there is the screaming mob. He can’t go that way and he cannot go back, however there is one way out, through a trapdoor in the floor. But just a minute, what’s on the other side of that door? 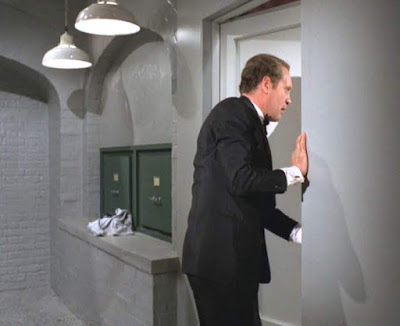 It would appear that small room with the four long drawers, one containing the dead body of No.34, appears to be just the outer room of the mortuary. Because behind that door is the real mortuary. 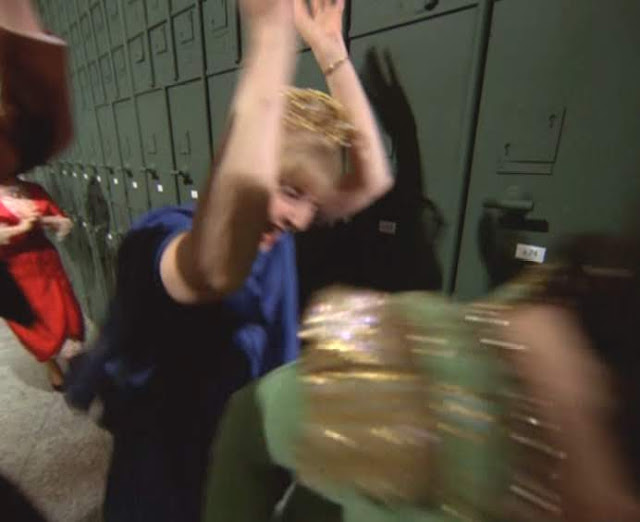 To be honest the few seconds of that room No.6 looks into passes by so quickly, that I have never really made study of it. There is a whole rack of numbered drawers set into a wall, the one there is numbered 74, and there are thirteen such numbered drawers. The question is, why are so many deceased citizens kept in drawers in the mortuary? I cannot think that so many deaths would require an autopsy. And even if they did, would the administration care? What’s more it seems the Town Hall is a funny place to have a mortuary, surely it should be in the hospital! But perhaps it was simply a matter of convenience, had the mortuary been in the hospital, they could hardly have filmed that scene when No.2 finds No.6 making the most of his opportunities, when he discovers the body of the man he cast adrift in the water earlier, locked up in the long box in that little room.

Be seeing you
Posted by David Stimpson at 07:25