Map of Your Village 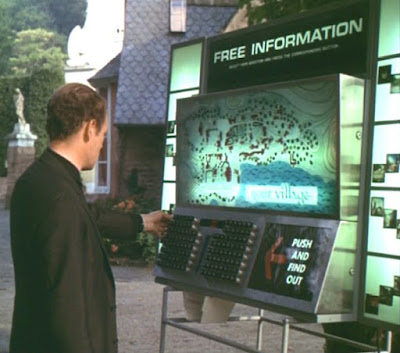 Do all those buttons represent each citizen living in the village? Only there doesn’t seem to be enough of them, what’s more a good many of those numbered buttons will be for the buildings, the shop, café, and for example, but

strangely not the General Store. Some of the buttons are even duplicated, as well as subdivided by a letter. 2d for example, she’s on the Town Council, one of those brainwashed imbeciles No.6 refers to. Number 9 isn’t what you would expect, a cottage where No.9’s agent {Virginia Maskell} lives, 9 is the taxi rank! Yet to my eye, when the Prisoner goes to press a button for the taxi he actually presses the number 1 button. Then it appears the taxi arrives just in time to divert the Prisoner’s attention from the map, so we the viewer, never get to see where No.1 lives. Where does No.1 reside? As it happens the list which the Prisoner runs his finger down has “1} Town Hall,” is this simply the number of the Town Hall, or is it also where No.1 lives? Somewhere in a room beneath the Town Hall along one of those passage ways perhaps. Or in an elaborately decorated room as we see in ‘Dance of the Dead’ in which No.2 goes in to make her report. I realize that No.1 is last seen in the rocket in ‘Fall Out,’ however we have no idea when the village administration took delivery of said rocket. Besides No.1 couldn’t possibly spend all his time cooped up in that rocket, he would surely have to have quarters elsewhere. He would be a clever man to be able to maintain his anonymity all that time, only able to remove his face mask to eat and drink in perfect privacy! Makes you think doesn’t it, that there’s more to going about wearing a theatrical mask and robed all the time, and not just for a few moments in ‘Fall Out’!