Eric Mival’s – Cutting Edge My Life In Films And Television 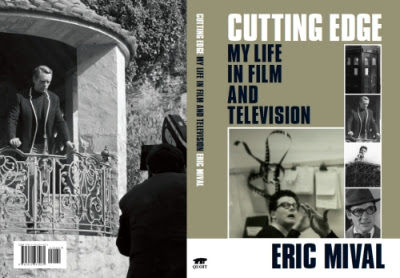 In late November I was sent a complimentary copy of Eric Mival’s book ‘Cutting Edge My Life In Film And Television,’ by the publisher Quoit Media Limited. Having now read the book, I was asked to express my thoughts, which are as follows.

The book is nicely presented, and has a very professional look. Of course being a fan of ‘the Prisoner’ is was quite natural that I should turn to the five chapters dealing with the series first. I was thoroughly absorbed for a couple of hours by those chapters, and found two or things out I didn’t know before, and I enjoyed Eric Mival’s insight into ‘the Prisoner’ from a music and film editor’s perspective. The Prisoner left many unanswered questions, and its interesting that even after almost 50 years it remains unclear whether it was Patrick McGoohan or George Markstein who came up with the original idea. For my money it was Patrick McGoohhan, and I know there are those who would strongly argue that point. However I found it interesting in what Eric Mival had to say on that particular topic, and may well have the right of it. I found his outline ‘Friend or Foe’ interesting, but was more fascinated by ‘Ticket To Eternity.’ Its strange that so many good ideas for scripts for ‘the Prisoner’ were rejected, and that begs the question why did they stuck with ‘Do Not Forsake Me Oh My Darling’ or ‘Face Unknown’ as it was originally. And I’m with Eric, as I also prefer the title ‘Face Unknown.’ I also agree with Eric that ‘Do Not Forsake Me Oh My Darling’ is unique for its quality of music, the best in the series, as I have always said.
I can see the book being handy for a budding film maker or editor. In fact I wish the book had been available back in 1999 as I would have got the film editor for ‘Village Day’ to read it first!
I enjoyed Eric’s anecdotes, especially about wanting the Beatles to sign his record album ‘A Hard Day’s Night,’ the fact that it was the “roadies” who signed it, a great disappointment! And Mr. Cubb {Michael Palin} who thought everything in and around his house was dirty, but as it turned out it was his spectacles which were dirty!
I was delighted to see photographs of back lots at MGM, some of which I had not seen before.
The book is well written, the text well constructed, although I have to admit that many of the film titles for schools, information etcetera which Eric worked on went straight over my head, and didn’t mean anything to me having never heard of any of them.
Eric’s remembrances of his trips behind the Iron Curtain ‘Red Reflections’ are a social reminder of the way things were, interesting that he found West Berlin more oppressive than in the East.
On the whole I found the book an easy and interesting read.
Eric Mival mentions a few times in his book, and is quite right, when he writes “The Prisoner has never left me,” I can heartily concur with that sentiment, as indeed can many other enthusiasts. It would seem Patrick McGoohan made prisoners of us all!

Be seeing you
Posted by David Stimpson at 17:27