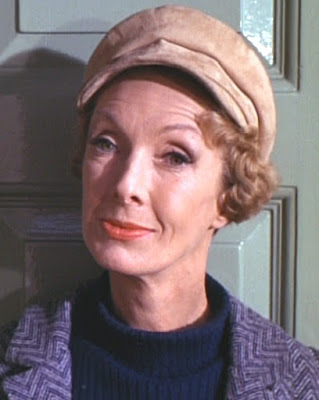 You are in a unique position, not only are you an agent working for The Village, but we discover that you have been seconded to The Village as Number 2! More than that, you are the only Number 2 whose name we know, albeit only your surname. We also know that you are a widow, that your husband was in the Royal Navy. Granted it’s not much, and it is difficult to know whether or not it’s a cover. That you are not Mrs. Butterworth, that you’re not a widow, and weren’t married to a Royal Navy man. However it’s all we have, and for one I am quite prepared to take you on face value, which means we know more about you than we do of any of your predecessors. In fact we know more of you than we do any Number 2 period!
You must have been in on this plan to allow Number 6 to escape The Village and return to his home in London, but not as Number 2. At the outset of the episode Number 2 is a man. So he must have overseen Number 6’s escape from The Village, and you had been moved into Number 6’s London house, under a bogus lease as well as bogus estate Agents! You were given his car to use, that’s a bit of a cheek isn’t it? But I guess your occupancy of the house and ownership of the car demonstrates that Number 6’s former life has been taken away from him. So it’s effectively as you said, he’s a now nameless exile, with no home and no status.
After you had lent Number 6 his own car, you hung around No.1 Buckingham Place just long enough for Special Branch to come calling, which you knew it would, so that you could collaborate Number 6’s story as far as you are concerned. When did you leave for The Village? My guess would be as soon as you had given your statement to Special Branch. After all you had to get to The Village before Number 6 was returned there, in time to be on hand to welcome him and present him with that cake you promised to bake him if he came back……he came back! But just how long had you been in The Village before Number 6 arrived? Not long would be my guess, because you hadn’t had time to change out of that harlequin patterned dress of yours. What’s more you are the only Number 2 to wear a negative badge. I say negative, I mean a white canopied Penny Farthing on a black background and curiously with a white numeral 2 instead of the more usual red!
So what happened the day after Number 6 arrived back in The Village of ‘Many happy Returns?’ That would be ‘Dance of The Dead,’ but what happened to you? If you had been brought to The Village simply to welcome Number 6 back to The Village, to present him with a cake, that seems an awful lot of trouble to go to. I don’t mean baking a cake, but to bring you all the way to The Village, when Number 2 could have welcomed him back instead. Unless of course you were to be the new Number 2 all along. That would in turn suggest that there was an episode in ‘the Prisoner’ to which the television viewer is not privy. It’s just a pity you were not retained in The Village for that episode, as it would have given the series some little continuity between the episodes!