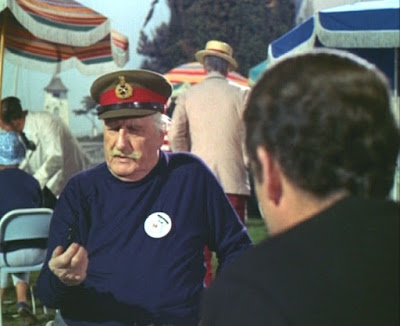 The General thinks the chess pieces aren’t what they might be you know, he said he used to be quite a handyman once. In fact he thinks he’ll carve a chess set for the Arts and Crafts Exhibition.
So the General used to be quite a handyman did he? He was also in the army, we take it the British army judging by his cap, but we don’t know which regiment. Well that’s not really important, I expect someone who has his file knows. The General is wearing his Village badge on his jersey, not on his cap to hide his cap badge, what’s more Number 2 refers to the elderly gentleman as the General. So the man has retained his former rank, as he must surely have retired from the army years ago. And yet Number 6 once played chess with another military man, another elderly gentleman whom Number 2 described as being an ex-Admiral. A General and an ex-Admiral, perhaps that’s why Number 66 wears his Village badge on his naval cap, to hide the badge, and the reason why he is an ex-Admiral, unlike the General Number 54, who doesn’t, and so retains his rank!
Looking at it another way, we know that names are not supposed to be used in The Village, although at times they are. Both the General and the Admiral act like names, they make the two men individual!