The Case Of The Disappearing Hearse! 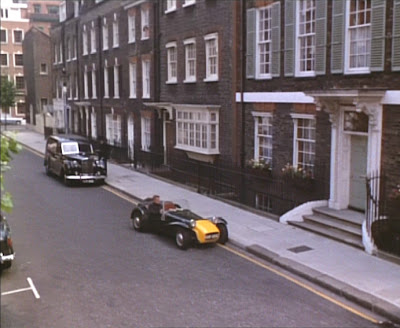 Here we see a scene from the Prisoner episode Do Not Forsake Me Oh My Darling, as the Prisoner, in the guise of the Colonel, played by Nigel Stock, parks his Lotus outside his London home of 1 Buckingham Place. Already parked in the street is a black hearse, that has shadowed the Prisoner/Colonel through the streets, so as to arrive in Buckingham Place first. Which is almost exactly what happened in the opening sequence of the Prisoner after he had tendered his resignation from Military Intelligence. Indeed much of what we see as the Prisoner drives through London is actually taken from Arrival! 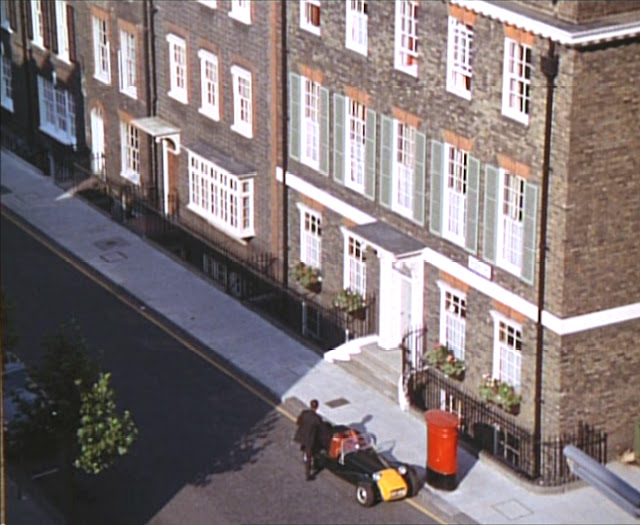 This second image is also from Do Not Forsake Me Oh My Darling, but there is no sign whatsoever of  the hearse. The hearse is nowhere to be seen in the street! What's more, the Lotus has been parked a little further on. And that's not Nigel Stock having just climbed out of the Lotus, but that of Patrick McGoohan!
There are more holes in this episode of Do Not Forsake Me Oh My Darling than there is in the village when M2's awake!
BCNU.
Posted by David Stimpson at 08:55