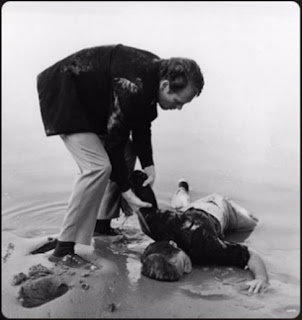 During the Dance of the Dead, we learn that No.240 was the Observer for No.34, until he died that is. I am of the opinion that the dead body No.6 finds during that episode, washed up on the beach, is that of No.34 What's more No.34 could have been a plant in the village, and being suspect, that is why he had his own observer.
So how did No.34 die, and in what circumstances? It is quite on the cards, that No.34 died at the membrane of the village guardian, suffocated to death, or half drowned and suffocated to death. Possibly because 34 was out after curfew, was waiting for something or someone. Perhaps he died because he was in possession of a radio, which No.6 took from the dead man's pocket. How No.34 was able to smuggle a transister radio into the village is beyond me. It might be that it was smuggled to him once he was in the village by person or persons unknown, possibly working in Adminstration. But the fact of the matter is, No.34 had a radio, not a transmitter, but a receiver only. And I think that the message No.6 heard whilst listening to the radio later in the episode, was meant for No.34. Apparently, according to the message, the appointment could not be fulfilled.That there were more important things to be done that night. So, No.34 had been 'hung out to dry' by his own people. Sent to infiltrate the village, those whom No.34 had expected to come to the village, would not be arriving. I wonder how 34 thought about that? So having heard that radio message, meant for the dead man, No.34, that would explain why No.6 was down on the beach that night. He was looking for a light, a plane, or a boat. Someone from his world.
No.6 once infiltrated a village, that of Colony Three. This was to find out where so many people were disappearing to, and why. People with specialist knowledge, or expertise, who were recruited to Colony Three, somewhere behind the Iron Curtain. People who once there, then cease to exist. But luckily for John Drake, British Military Intelligence had a man in Section 1.
Be seeing you
Posted by David Stimpson at 09:00