Is That Me Standing Over There - Or You?

In the episode of The Schizoid Man No.6 is taken from his home, and put through a series of conditioning treatments over several weeks, so that one morning he wakes up to find he's a different man. He's grown a moustache, he's now left handed instead of right. His favourite dish is flapjacks, and he smokes black Russian cigarettes, and has been given the No.12, and spends the episode trying to prove that he is not No.12, but No.6, when there is already another No.6 in the village! 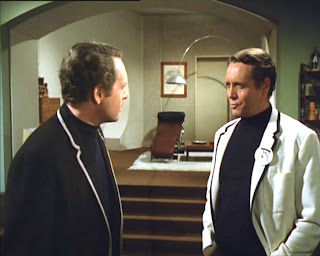 As the episode progresses No.6 tries desperately to hold on to his identity, as No.2 tries to prove to No.6 that he is not No.6, but No.12. No.6 does this in the gymnasium through a shooting contest, and fencing. But although No.6's fencing is "good agricultural stuff" it doesn't prove No.6 is No.6, but furthers No.12's cause that he is No.6! Even a fingerprint test fails to be conclusive!
Finally, in a last desperate attempt to prove who he is, No.6 turns to No.24-Alison, with whom he has a genuine mental link. And so using a deck of Zenae ESP cards, but only a run of five, he hopes to prove once and for all that he is No.6, and that No.12 is the "economy pack." But 1 out of 5 only goes to prove that this No.6 has no such mental link with No.24-Alison. However the other No.6 gets 5 out of 5, and so proves that he is No.6. But there was a much easier way to prove which one of them is No.6, because he has a mole on his left wrist. Ah, but one of them doesn't, and so he cannot possibly be No.6! But that wasn't the easiest way to tell the 6's apart, and it involves the next picture. 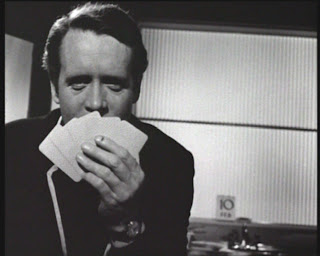 This picture shows No.6 wearing a black piped blazer with off-white piping. But this photograph is produced by No.6 who is wearing a cream blazer with black piping, as in the following photograph. 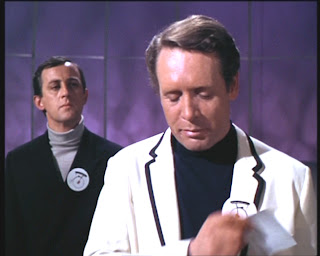 This No.6 takes a Polaroid photograph from the breast pocket of his blazer as a final demonstration that he is No.6. The Polaroid picture was taken by No.24-Alison one evening after she and No.6 had been practising with the ESP cards, as Alsion was entering the photographic competion at the forthcoming 'Village Festival.' 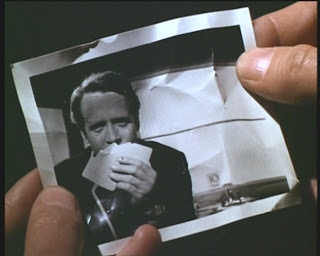 However, I feel that this polaroid does nothing to prove that No.6, in the cream blazer, is No.6. After all, No.6 in the picture is actually wearing a black blazer with off-white piping, and is proof that he is No.6.
Actually this polaroid picture would have worked, if the original script had been followed, with both No.6's wearing a balck blazer. But it was thought that to have both No.6's wearing identical piped blazers would make it too confusing for the television viewer at the time. So the change was made to have one No.6 wearing a cream blazer. And that's why the Polaroid picture doesn't work in the way it was originally planned. But in the episode simply proves that No.6.....is well No.6. Simple and fool proof.................I think!
Be seeing you.
Posted by David Stimpson at 09:24