What's In A Number?

There have been numerous No.2's who have taken up office in the village, including No.6, who was elected to that lofty position in the episode of Free For All. There have been at least four Number 8's, three twelves, two 22's, and at least three 14's. There seems to be ways one can leave the village, the first being through death, No.8-Nadia whose predecessor vacated the village, he died. But there was no funeral, as you need a body for that. Well Cobb of Arrival was supposed to have died, there was no body of course because his suicide was highly exagerated. But that didn't stop his funeral from taking place! Another way to leave the village is to be a 'trustee,' like No.2 who is allowed to leave the village after his/her term of office, or to go on leave from the village like the retiring No.2 of It's Your Funeral. Cobb was also allowed to leave the village, but then he had been recruited, and trusted to leave the village. Nadia Rakovsky was also allowed to leave the village, but then she was an agent of the village, or at least the authority behind the village.
But I am digressing, getting away from the point. And the point of the matter is, that there can only be one number of any particular number in the village at anyone time. Oh, there can be a number in the village, like No.14, who was an old lady in a wheelchair now residing in the village graveyard, and No.14, a doctor working in the village. However you can have two of the same number in the village, but then you subdivide it, No.113 and No.113b. No.2 can also be subdivided, as members of the Town Council whose Number's are 2a, 2b, 2c, 2d, 2e, 2f, 2g, 2h, 2i, 2j, 2k, 2l.
'FREE INFORMATION' can be gained from the electronic information board. There on the button panel there is actually three buttons marked 6, together with the subdivided number 6h. This might be peculiar in itself, but what is even more of a puzzlement is the fact that on that button panel that there is no number 7, deleted because it is a lucky number, apparently. But the fact of the matter is, there is no number containing the digit 7, No 27, 37, 47, 57, 67, 87 and 70 through to 79 is non-existant, and have been replaced with 5c, 3f, 2d, 4d, 6, 3e, 5, 9d, and 8r. So much time and effort had been put into that electronic 'Free Information Board', and you only see it briefly in two episodes! 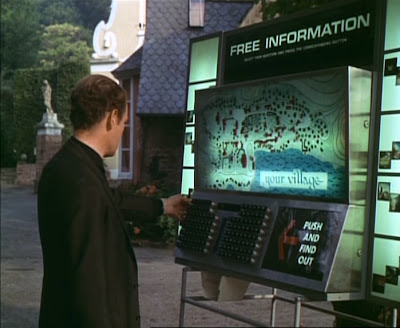 BCNU
Posted by David Stimpson at 09:13