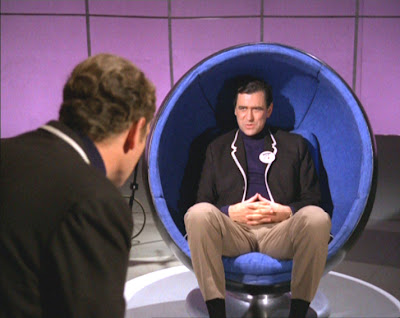 No.2 "Subject shows great enthusiasm for his work, meaning you'll work any hours of the day. He is utterly devoted, to playing the role of 'Danger man' John Drake, and loyal to Lew Grade. Is this a man, having become the highest paid actor on television, being a household name, who suddenly walks out?"
The Prisoner "I didn't walk out, I resigned!"
No.2 "People change, exactly. So do loyalties. You became disillusioned with the 'Danger Man' series. You felt typecast as John Drake. That the ideas for the scripts had dried up, that they had become dull and repetative. So you decided to put yourself first for a change.
The Prisoner "Not Mine."
No.2 "Very commendable. But lets be practical. I'm interested in facts."
D6 "Yes, and so are we! However due to the lack of hard facts in this case, all I can do is speculate. In the previous debriefing of the Prisoner, as with the above, I have put certain words into No.2's mouth. And yet having done so, I feel that this reveals far more than McGoohan did in both scenes!"