What’s that Number 6 Up To? 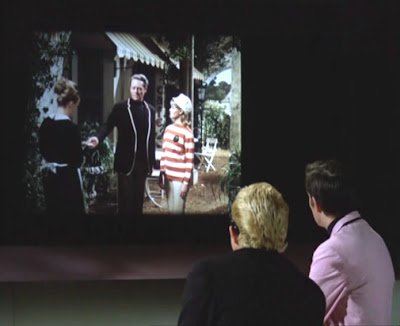 "Isn't that Number Fifty, the watchmakers daughter with Number Six?"
"Yes" One hundred "They're at the cafe, Number Six just bought her a coffee."
"Getting a bit cosy together aren't they?"
"Well that's only to be expected. After all I did bring them both together in the first place."
"Yes, but wasn't that a little dangerous?"
"How do you mean?"
"Well I've been studying Number Six's file, in connection with girls. There was Nadia to begin with, they attempted an escape together."
"And you think that Number Six will attempt to escape with the watchmakers daughter? Besides Nadia was a plant, and a little more than a girl!"
"Well yes Number Two. But then there was Number Twenty-four."
"Who was she?"
"Alison, the one who had a mental link with Number Six. But she betrayed him."
"Mmmmm, bright girl"
"Yes Number Two, but don't you see for a man who shuns the attention brought to him by the female sex, he certainly enjoys their company. Don't you think?"
"He'll be too busy soon to enjoy the company of the watchmakers daughter Number One hundred . Things will soon liven up for him."
"If you say so Number Two."
"I do say so. And besides there is one thing which you have failed to take on board."
"And what's that Number Two?"
"All the women who get close to Number Six never seem to stick around!"
"Ah, Number Eight would have done given half a chance. She was besotted by him....... besotted!"
"Hypnotised don't you mean?"
"Ah, that would account for it."
"What would account for it?"
"Why she, like all his other female companions, didn't hang around too long. Number Six clicked his fingers did he?"
"You trying to be funny?"
"No, apparently not!"
"Aren't we getting away from the point of the matter?"
"Yes Number 2."
"You had better go, Number 6 will be paying me a call very soon."
"And the watchmakers daughter?"
"You just keep an eye on the little watchmaker One hundred."
"That Number Six gets all the good jobs" Number One hundred muttering to himself as he departs the Green Dome, and saluting Number Six who is on his way in.