Echoes of The Prisoner!

Quite recently my wife and I sat watching an episode of ‘Man In A Suitcase - Somebody Loses, Somebody….Wins?’
McGill takes a job in posing as a buyer of photographic equipment. In he encounters a former female associate Ruth Klinger who worked for Section K but apparently has defected to the . The secret police set her a loyalty test involving her old flame McGill who is trying to track down the missing Johann Liedkind, who is part of a neo-Nazi revivalist group, when McGill discovers this, it places him in a dangerous situation. By betraying McGill Ruth attempts to convince the East German authorities that she's a double-agent. At the same time McGill is faced with a dilemma. How can he escape and save Ruth with him, without blowing her cover? Someone at Pinewood studios must have been having a laugh, by design, or is it merely a coincidence? 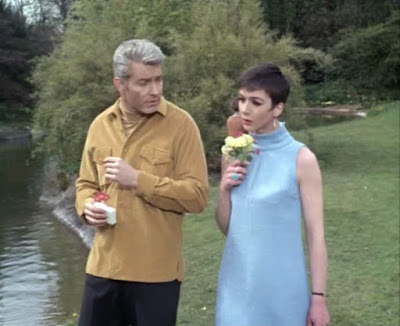 In one scene McGill and Ruth are taking a walk in a park together, Ruth Klinger is wearing a light blue dress, and carrying a bunch of primroses! This was quite startling, because where have we seen that before?  My wife and I looked at each other with incredulity. We instantly thought of the scene in ‘A Change of Mind’ when Number 86 is caught picking Primroses in the woods by Number 6. Alright the dresses are not the same design, the dress worn by Number 86 was Angela Brown’s own, but the colours are identical. 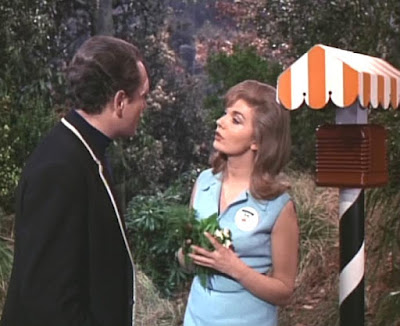 It must be a coincidence surely, but a strange coincidence nevertheless. I think we have to allow such a thing, because if not that means………well as far as I can ascertain the only person to have worked on both ‘A Change of Mind’ and ‘Somebody Loses, Somebody….Wins?’ was casting director Rose Tobias-Shaw.


Be seeing you
Posted by David Stimpson at 07:40