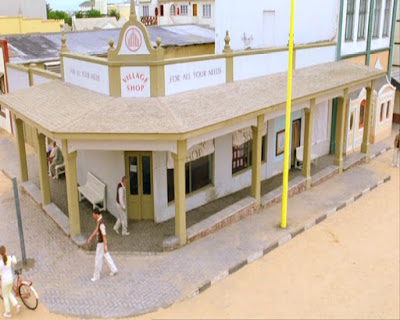 An Un-2 passed by the Village shop
Once more the series is going along far too quickly for my own liking, after watching each episode I’m still left wanting more Village!

In ‘Schizoid,’ when Two goes out into the Village after Six has warned him that two-times-Six wants to kill him.
6 “Who is he?”
2 “Who is who?”
“There’s a man in the Village, who looks like me, exactly like me. He says he’s going to kill you.”
“Six if going to kill me!”
“No he’s going to kill you!”
“Oh, and that Six, he’s angry. Well isn’t that how you feel? Come on admit it, You’d love it, love it a chance to kill me.”
“After what you’ve done, yes I’d like you dead.”
“So you will be the assassin, isn’t that logical? Don’t we live by logic?
“Not your logic. Not any more. And your game, what you do to me here won’t stop me.”
“Are you quite sire it is a game?”
“Yes. Cause no-one gets close to Two unless Two wants them to.”
“Well perhaps he will. Perhaps the moment will come. I’ll walk today…be seeing you.”
As he walks through the village {to the song You Are My Sunshine} Two discards his cloth cap, his gloves, his walking stick he places in a litter bin. He takes off his jacket and drops it in the road. His tie removed dropping it in the wicker basket on a bicycle as a woman pushes it passed. Taking off his sun glasses Two pauses and places them on a schoolboys head. Then as Un-Two he sits down on a bench to enjoy the sunshine, as the following announcement is made over the public address system.
“Impersonating Two is an act of treason. In the event of a Two impersonator arising, you must seek him out and apprehend him. This man may look like Two, but you will know that he is not Two, because he is not Two. He may appear in the village in a dishevelled state, which has resemblances to Two. He may claim to be Two, but he is not, and he must be treated as who he is, which is some one who is not Two. He is a danger to the Village.” Which must have been pre-recorded by Two. 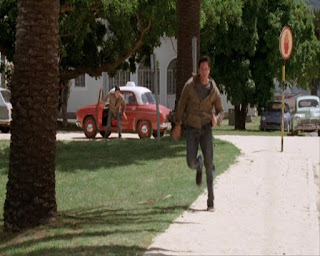 Every bit of pain Six knows is because of Two, but vows that he will find a way to make Two suffer! Casually watching from a distance is Six, well two times Six actually. The question is what is the reality? Are there really two Six’s in the Village? It seems that two times Six wants to kill Two, but doesn’t that mean Six wants to kill Two?
Isn’t two times Six a figment of Six’s imagination, conjured up in his subconscious, because it seems that only Six can see two times Six. Well just for a second Un-Two sees two times Six’s reflection in a window of the Village Shop, but it was only for a second then the reflection was gone. Un-Two goes out and about in the Village, he calls into the village shop and enjoys smoking a cigarette with the shopkeeper; 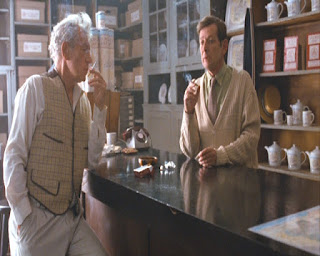 Ting-a-ling-ling sounds the shop bell as Un-Two enters the Village Shop.
“Do you have cigarettes?”
The Shopkeeper "No. But would you like to buy a map of the village?”
“You sure you don't have any cigarettes?.....Would you look?”
“We haven't had cigarettes here for eight years and five months.”
“If you don't look, how can you be really sure that you're right?”
{The Shopkeeper-37927 looks under the counter and produces a pack of Village cigarettes and a book of matches. Un-Two looks longingly at the packet. The shopkeeper unwraps the packet and offers Un-Two a cigarette and lights it. Un-Two draws long and deep on the cigarette, and offers one to 37927, and together they enjoy a guilty pleasure.}
Shopkeeper “I didn't supply you with these cigarettes.”
“No.”
“I don't have them. I don't even know what they are.”
“No.”
“I'd forgotten they even existed. You came in here to buy a map.”
“I used to smoke in order to think.”
“You did? Are you thinking now?”
“I am. Sometimes........”
“Yes.”
"I think...........”
“Go on.”
“These things will kill you, you know. The main health risks in tobacco relate to diseases of the cardiovascular system. In particular  myocardial infraction, diseases of the respiratory tract, such as chronic obstructive pulmonary diseases. And asthma, emphysema and cancers, in particular lung cancer, and cancers of the larynx and tongue.”
“So I've heard.”
“Smoking is a kind of suicide.”
"That's a bit philosophical....for a Thursday.”
{Un-Two stubs out his cigarette}
“Thank you, and I'll say good day to you.”
As Un-Two leaves The Village shop the shopkeeper is on the telephone making a call to the Clinic to report his customer.
This scene is a very seductive one. The way Un-Two and the shopkeeper-37927 enjoy smoking their cigarettes always makes me feel like I would enjoy a cigarette, and I gave up smoking over twenty years ago!!!
As for Un-Two, there is no Un-Two, its Just Two. But somehow I cannot help but like both characters. As for two times Six, Michael looks down upon the Village through a window of one of the twin towers, and sees two times Six standing on a street corner outside the Village shop. He bangs on the window trying to attract two times Six’s attention. But then a bus passes by and two times Six is gone…… perhaps he was never there in the first place. Because it’s himself Michael sees standing on the street corner, meaning Six, and not Two times Six! 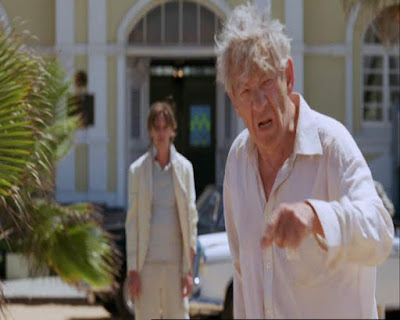 2 returns home to the comfort of his home Palais 2

Breathe in…..breathe out……more Village!
Be seeing you
Posted by David Stimpson at 07:34