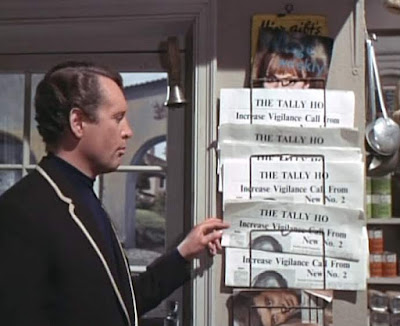 Ting-a-ling-a-ling
When Number 6 enters the General Store he takes a copy of The Tally Ho from the newspaper rack. A little later when he’s listening to the first few seconds of Bizet’s l’Arlesienne, and apparently circles the word security, and writes a question mark over it.
Finding the Davier recording of l’Arlessienne unsatisfactory Number 6 takes his leave of the General Store
Ting-a-ling-a-ling
But he leaves his copy of The Tally Ho behind. 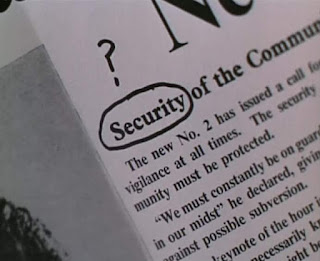 The shopkeeper glances at the copy of the broadsheet, he observes the circled word and question mark, this instantly arouses his curiosity, and within moments of Number 6 leaving his shop Number 112 is on the telephone to Number 2.
And that’s fine as it goes, the copy left on the counter by Number 6 is folded length-ways, and it’s that copy the shopkeeper picks up, except in close-up as above it’s a different copy which the shopkeeper looks at observing the circle
and question mark. And as the shopkeeper goes to make a telephone call to Number 2 it’s the length-ways folded Tally Ho he has in his hand, while in close-up The Tally Ho is folded into a rectangle, the downward crease is quite discernable in the above picture. Indeed when the shopkeeper leaves his shop and goes running off to make his report to Number 2 it is this copy of the Tally Ho he carries, not the one folded length-ways as it should have been. 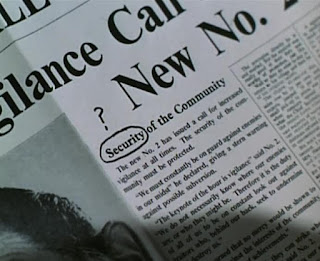 And it is this copy which is shown to Number 2, this is confirmed by the fact that the circle drawn round the word security and the question mark are identical. The difference in colour can be put down to the difference in lighting, making the downward crease even more discernable. Had this been Number 6’s copy of The Tally Ho there would have been a crease running across the broadsheet instead!
This is quire remarkable really, because usually there is little continuity when it comes to location shoots and scenes shot on set at Studios. And yet they did get it right about The Tally Ho on location when the shopkeeper went running off to the Green Dome, and on set in Number 2’s office. But wrong when it came to the set inside the General Store!
But just a minute, what’s the shopkeeper’s little game? He’s a troublemaker if you ask me! Because not only is it the wrong Tally Ho which he brought to Number 2’s attention, but it wasn’t Number 6 who drew the circle and question mark! Watch the scene as Number 6 listens to the first few moments of 3 of the l’Arlesienne records. Yes he is observed to write something on a page of his notebook, but it’s impossible for him to have written anything on The Tally Ho, because the broadsheet is underneath the records all the time!
So if Number 6 didn’t circle the word security, and write that question mark, it must have been the shopkeeper-Number 112. However on the production front, perhaps McGoohan simply forgot to draw the circle and write the question mark on the Tally Ho he took from the newspaper rack. That would account for the difference in the Tally Ho’s, and the need for the shot of a different Tally Ho {second picture down} to be inserted into the scene.
So the question is, did McGoohan later draw the circle and write the question mark on The Tally Ho himself, or might it simply have been a member of the production crew? We’ll never know of course, its another of those unanswerable questions!