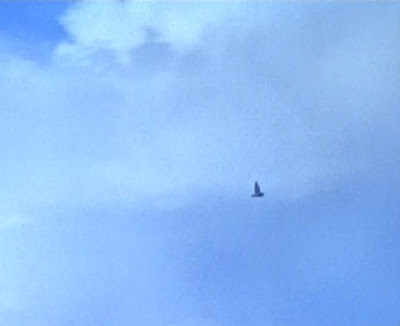 Observer “Tracking.”
Supervisor “Beam.”
“Beam on sir…..yellow….tracking….orange….its out of sight!”
Supervisor “Get me a fix, radar.”
“We’ve got a fix sir.”
“Hellfire.”
The proceedings are suddenly interrupted by the presence of Number 2 who demands to know what the Supervisor thinks he’s doing.
The pigeon, Number 6 is sending a message.
Number 2 takes command, he doesn’t want the pigeon destroyed, he orders the pigeon to be brought down, he wants the message it’s carrying. He orders the Beam to be set at minimum strength. Just as well really, Hellfire would have burned the pigeon to a crisp, they’d have been nothing left of it or the message!
A search team is sent out to find the pigeon, and is eventually brought to Number 2 in the Computer Room. A note is taken from the bird’s leg……just a minute, Number 2 missed something, two indentations of two further numbers above the written ones in biro. These indentations in the paper suggest there was another coded message written before this one, or at the very least Number 6 changed his mind. And this scrap of paper is the middle part of a larger piece of paper, although I’m not sure what that tells us. 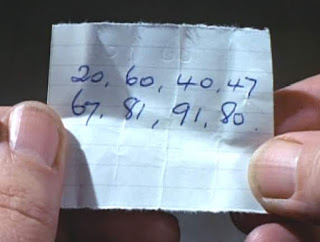 However Number 6 did not write this coded message, compare this to the message we do know was written by Number 6 below.


There was a change of mind regarding the code, because originally Number 6 was to have used letters instead of numbers. But just another minute……the message which Number 2 takes from the pigeon’s leg isn’t the one written by Number 6. Here is his coded message, written in black ink using a broad ballpoint, or felt tip pen towards the bottom of a page, and torn from the notebook he purchased from the General Store. I’ve been unable to identify the pen Number 6 used. 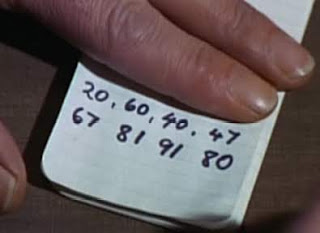 So what’s the game? There was a change of mind regarding the code, because originally Number 6 was to have used letters instead of numbers as demonstrated in this piece of unused exposure strip. 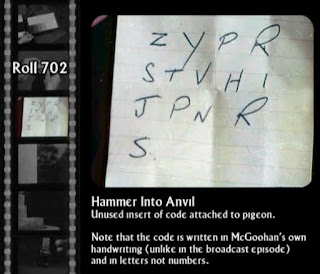 So where was this pigeon flying off to? The pigeon was ringed, that makes it a homing pigeon, which in turns means it would have eventually returned to the village!