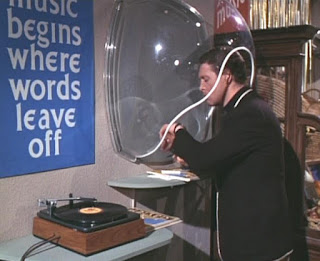 In a scene from ‘Hammer Into Anvil’ at Number 6 tells the shopkeeper that he’d like to hear l’Arlesienne.
Shopkeeper “Ah the Davier recording beautiful, there’s no-one to touch him on Bizet, it takes a Frenchman.”
Number 6 “I’d like to hear them all.”
“I beg your pardon sir?”
“How many copies of it have you got?”
“Six.”              {Bloggers Note: It would have to be that number!}


“May I have them?”
“If you insist sir, but they’re all the same.”
“I doubt it.”
“Yes sir.”
The shopkeeper begins to gather the records from the racks.
“Thank you very much, and the others, all of them.”
“Yes sir.”
Number 6 then takes the records along with his copy of The Tally Ho over to the record booth, and puts the first record on the turntable, and as he begins to listen he appears to be timing it. After a few seconds he takes the record off the turntable and replaces it with another copy of the record and again times the first few seconds of l’Arlesienne. It is now that the shopkeeper begins to take notice and stands watching Number 6’s behaviour from behind the counter, his curiosity aroused. A third record is then placed on the turntable, and again Number 6 times it, only this time he takes a pen and notebook from a pocket in his blazer and writes something down, aware that he is being observed by the shopkeeper. Number 6 doesn’t purchase a copy of the record as he claims it’s not a satisfactory recording, while the shopkeeper thought it was first class. But then it’s only a matter of taste.
Of course all the records are the same, they sound identical, there’s no variation in tempo, all the sleeves are the same, so what was Number 6 listening for, what makes one of those records different? Nothing, they are as they appear to be, all the same. And Number 6 might have kept looking at his watch as the shopkeeper observed, but that doesn’t necessarily mean he was actually timing them. And what might Number 6 have written in that notebook of his, an addition to his shopping list perhaps, a memorandum to remind himself to do something later in the day.  The shopkeeper said Number 6 wrote something on a piece of paper, which indicates he didn’t see the notebook, and if he didn’t see the note book it was because Number 6 had his back turned to him. So how could the shopkeeper have seen Number 6 writing something down on any piece of paper? As it is there isn’t any proof that Number 6 actually wrote anything down! There is certainly no discernable message hidden in the music, or in the playing grooves, and it appears that Number 2’s close examination of the six records showed that no massage had been etched onto the run out groove. Because over the years it has been a trend to have hidden messages etched on the run off groove. This is no better demonstrated than on ‘the Prisoner’ soundtrack record {the BAMCARUSO label}. 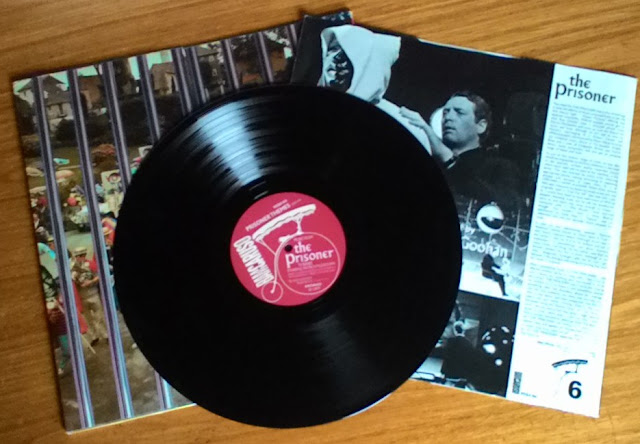 The message etched on side one “Be seeing you - on side two” and on side 2, “I am not a number….!!” along with “Hip Hip Hooray.” To discern the messages the record does have to be held in the light at a certain angle. I didn’t know about messages myself, not until I was told about them back in the late 1980’s.

Be seeing you
Posted by David Stimpson at 07:33