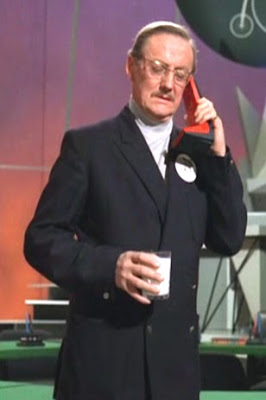 Number 2 has been speaking to Number 1. Well we assume its Number 1, certainly Number 2’s caller is male as he calls him sir. He makes a number of reassurances, that there is no problem, that they are getting a hundred percent co-operation from everyone, and Number 2 is anticipating a truly exciting result. And about the Professor, well that was just a mild aberration, a couple days rest and adjustment and he’ll be doing everything they’ll need. And Number 2 will keep in close touch, in the closest touch.
“Probably the most important human experiment we’ve ever had to conduct, he’s treating it like a military exercise.” If I were Number 2 I’d keep my thoughts closely guarded, let alone speak them out loud, even to just myself, you never know who might be listening!
Just a minute! That telephone……it’s the normal ‘L’ shape, not that over-sized red curved phone this Number 2 is forced to use in ‘A B and C,’ why’s that then? Is it an indication that ‘A B and C’ should have featured in the series after ‘The General?’ 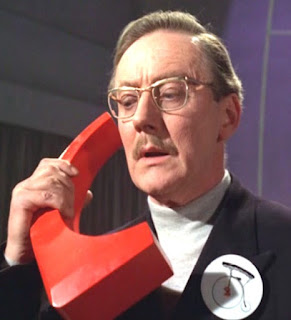 I should have imagined that once Number 2 had used that curved phone in the one episode he’d have to use it in the other. But then ‘The General’ was produced before ‘A B and C,’ so that phone must have come in later. Only two actors were forced to use that over-sized red telephone, Colin Gordon and Patrick Cargill, although there was another two Number 2’s to have the phone on their desk. That was in ‘Do Not Forsake Me Oh My Darling,’ and ‘The Girl Who Was Death,’ except in those episodes we do not see either Clifford Evens or Kenneth Griffith use the telephone. Number 1 also had that same red, curved, over-sized telephone but he was never seen to use it!