‘The Girl Who Was Death’ is a story told to both the three children in the nursery together with Number 2 and his assistant Number 10, a fairytale and right good carry on at the same time. Did I say “carry on”, well yes “The Girl Who Was Death” does have something in common with “Carry On Don’t Lose Your Head” {1966}, in common yes with the film studios at Elstree, and those French uniforms worn by Napoleon’s Marshals. 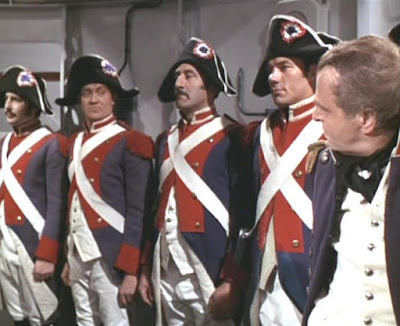 Have you seen those uniforms before? Well actually if you have seen the carry on film “Don’t Lose Your Head” {1966} you have.

The time is of the French Revolution and Citizen Robespierre is beheading the noble men and women of the French aristocracy. When word gets to two noblemen, Sir Rodney Ffing {with two f’s] and Lord Darcy Pue take it upon themselves to aid their French counterparts. Sir Rodney is a master of disguise and becomes known as “the black fingernail” the scourge of Camembert and Bidet, leaders of the French secret police.
Camembert’s soldiers are equally as inept and incompetent as Napoleon’s Marshals in “The Girl Who Was Death.” Of course Carry On “Don’t Lose our Head” was filmed at Pinewood film studios at , the same location for the film studios, the location for the filming of “the Prisoner.”
Now I am not suggesting that the scenes with Napoleons Marshals in “The Girl Who Was Death “is a “take off” of those scenes in “Don’t Lose Your Head”, yet the uniforms are the very same ones, and Carry On “Don’t Lose Your Head” was filmed in 1966 {September 13} seven days after the commencement of filming at Portmeirion.
The uniforms would still have been hanging around in wardrobe after the filming of “Don’t Lose Your Head” when filming took place at studios, a mere stones throw from Pinewood. French uniforms would have been needed for Napoleon’s Marshals, and the fight scenes with the French soldiers in “Don’t Lose Your Head” could have inspired the fight scenes in “The Girl Who Was Death.”
But the blog reader, or perhaps I should say citizen, because we are not quite finished with the uniforms of French revolutionary soldiers, for those very same uniforms, after no doubt having been cleansed, turn up once more in “The Scarlet Pimpernel” {1982}, with Anthony Andrews, Jane Seymore and Ian McKellen

Be seeing you
Posted by David Stimpson at 07:46