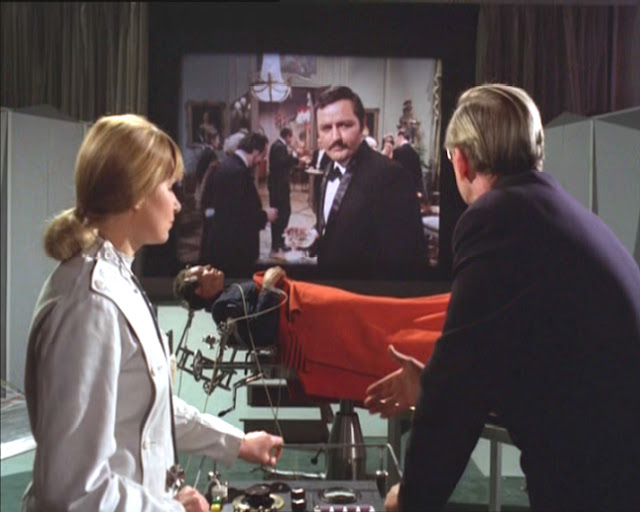 It's a dangerous experiment which No.2 has authorised to be undertaken, after all No.14's new drug hadn't even been tested on animals! However the idea behind the experiment was to get inside No.6's subconscious, into his dreams, to see what would have happened if the Village administration had not got to him first. The images of No.6's dreams projected onto the wall screen
Well this is not the first time such an experiment had been undertaken. Such experiments were being carried out as early as 1957 by Doctor Mathew Roney, assisted by Barbara Judd, and in this instant such a device, called an "Optical Encephalograph," was used to hone in on the subconcious mind, for it to generate pictures of a long ago event, which took place on......Mars, when the planet was far from dead, but populated by Martians!

This experiemnt took place with Professor Bernard Quatermass, but the device failed to work. The device was attached to the head of Barbara Judd, Dr. Roney's assistant.

Images are taken from the optical nerve centres of the brain, recorded, and projected onto a monitor screen, so show...............quite graphic images of a Martian purge! 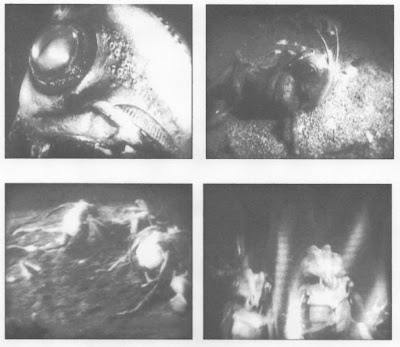 The purge singles out the weak from the strong, and the strong killing the weak in a mass frenzy, this in the 1957 television series Quatermass and the Pit.
Okay, the "Optical Encephlograph" may be a crude device, but it's principles are similar to that of A B and C.
Be seeing you
Posted by David Stimpson at 08:28