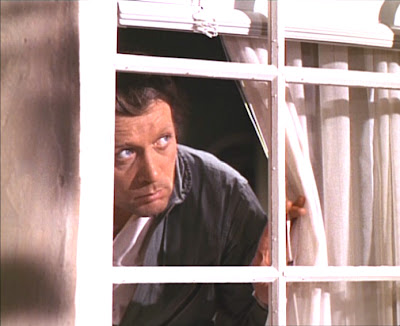 It never occured to me until I looked at this picture the other day. The Prisoner has been unceremoniously returned to the Village in Many Happy Returns, he looks out of the window, and I naturally assumed that he was looking out upon the scene outside. After all the Village had suddenly returned to life. the citizens parading round the central piazza and the Brass band plays. 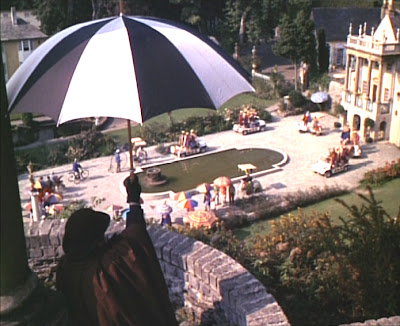 Yet it is not this scene which the Prisoner looks out upon, as his eyes are plainly turned towards the sky. He's looking for the Gloster Meteor jet aircraft which brought him to the Village. But sadly for Number Six the aircraft is long gone. Not that it would do him any good if he could have seen it. I should think that the Prisoner is now under the impression that he has been betrayed by his ex-colleagues, seeing as the RAF Group Captain was piloting the aircraft {except he wasn't} despite his story, or because of it, they had him put back in the Village, out of harms way.                   BCNU
Posted by David Stimpson at 08:08