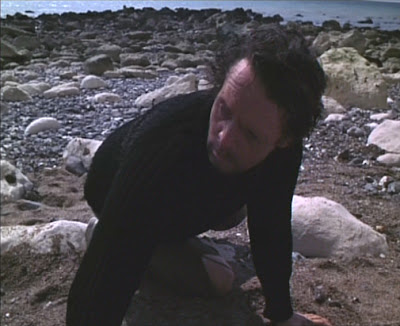 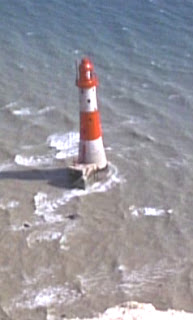 So, last night the escaped Prisoner Number Six abandoned ship, and after a long swim in the English Channel, he's eventually washed up on the beach at Beachy Head on the south coast of England. An interesting point is, that the Lighthouse at Beachy Head was actually manned at the time of the Prisoner, so the Lighthouse Keeper could have witnessed the filming on the beach.
So after scaling a chalky cliff, thanks to some recent cliff erosion, he follows a gypsy to an encampment, there the Prisoner is treated to the first honest act of kindness by a young gypsy woman, and directs him to a road.
And so having been given breakfast at the gypsy camp, about this time now, say eight-thirty in the morning, the Prisoner is lying fast asleep in the back of a Luton van. 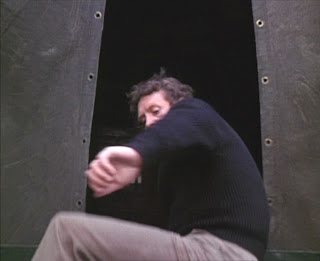 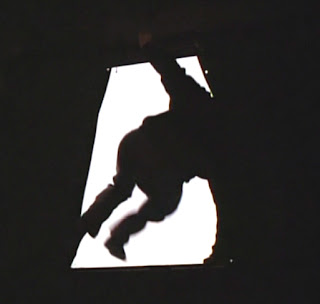 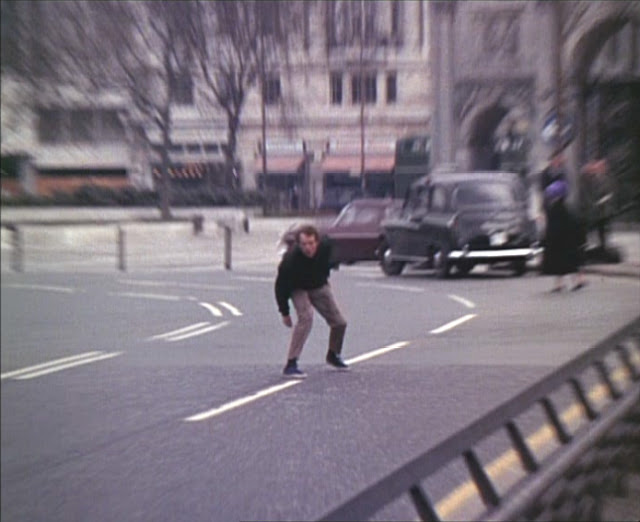 Then the Prisoner wakes up, there's the sound of a siren, it might be an ambulance, fire engine, or the police! But whoever it is, whatever it is, it causes the Prisoner to jump up, and leap out of the back of the Luton van and into the road of busy London traffic! I mean what a thing to go and do! After all the Prisoner had put himelf through, had to endure to get back home to London, only to be run down in the road by a car, taxi or London bus....it doesn't bare thinking about does it readers? It was a hell of a risk the Prisoner took leaping out like that.
It has been quite a journey for the Prisoner, but having found his way home, he's finally standing in the study of what was once, and in all probability still is, his own home in London. 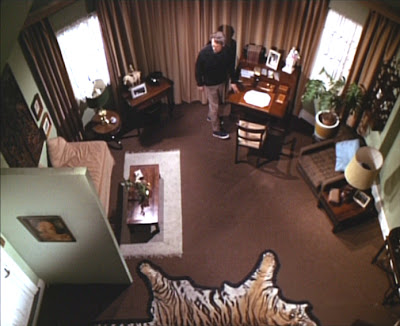 Yet the Prisoner still has doubts and who would not, standing there in that study, he could easily be in London, or still in the Village! So the Prisoner looks out of the window at the view outside, and picks up the receiver of the telephone for reassurance.
Just a minute.......... 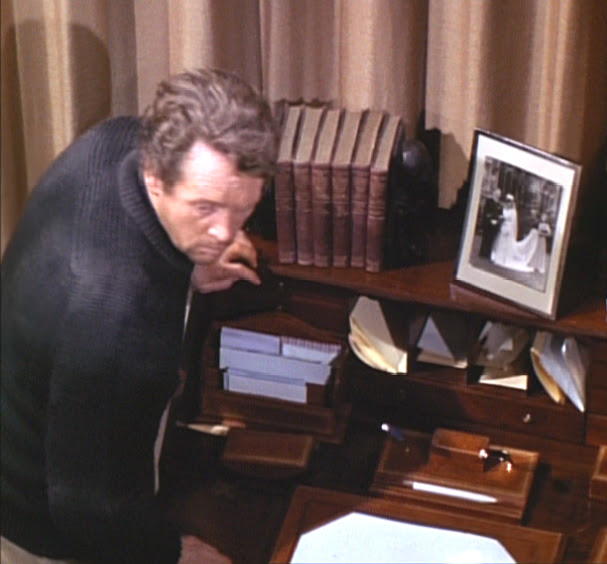 I don't know who the actual couple are in the wedding photograph, of course it's supposed to be Mrs Butterworth and her husband Arthur, seeing as how he's in naval uniform. But it's that set of books there on top of the bureau that attracts my attention.....they coulnd't be a part set of The Children's Encyclopaedia could they? Well such an educational work by Arthur Mee was produced in three colour bindings. But then perhaps you have no idea of what I'm talking about. 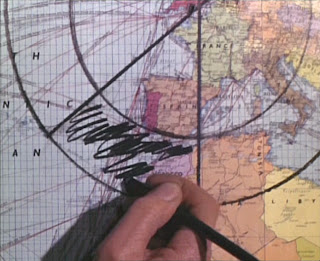 And so it is that the Prisoner has two calls to make, one in town, the other in the country, and Mrs Butterworth kindly lends her car to the Prisoner, an act of kindness perhaps, to allow the Prisoner one last sense of freedom before it's so unkindly snatched away from him again.
So, with the help of the Colonel, begrudgingly given by Thorpe, a Naval Commander, and RAF Group Captain, the location of the village is calculated, just about here said the Commander, then scribbled all over the search area. Now we'll never know where the Village is! 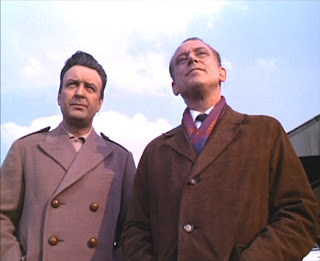 Up until now, we have had a definite time line for Many Happy Returns, however  since having met up with both the Colonel and Thorpe, the time line seems to have been thrown out with the bath water. For me what takes place after the location of the Village has been estimated, everything moves so quickly, it's possible I suppose for all of the aspects of their ex-colleagues report to be checked out in a day - the Lighthouse, the gypsy camp, Mrs Butterworth. But then there's the question of the time taken to get an aircraft, permission for refuelling at RAF Gibraltar, and the time taken of the actual flight, not to mention a search area of some 1,750 square miles, it might even be an Island! But we have to take all that on face value, because what we do know is, that today on March 18th the Prisoner actually makes it back to his home of No.1 Buckingham Place in the City of Westminster, London. And that he's an old, old friend who never gives up!

I'll be seeing you
Posted by David Stimpson at 09:05