At The arts Seminar 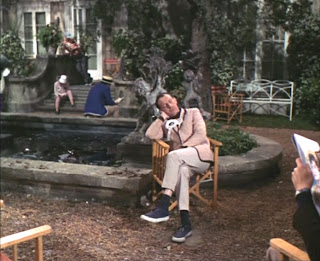 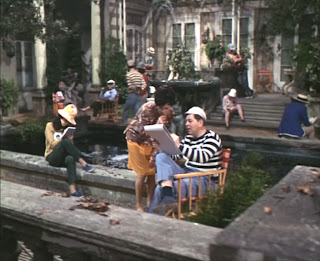 There is obviously more about the village, than the extraction or protection of information of its citizens. There has been the Arts & Crafts exhibition, the Village Festival, and now we have an artist here in the village, Madam Professor, we are lucky to have "Art Seminars" held in the garden of the Professors home.
Indeed there was a wide selection of citizens painting, drawing, sketching, reading, and that includes No.6, which appeared to me to be a bit odd. Madam Professor busied herself flitting from student to student, giving both help and advice where required. I asked Madam Professor what the seminar was all about.
"That man there, what do you think he's doing?" I looked across the garden to a man sitting in a chair, he was busy tearing the pages out of a book, "Tearing up a book" I replied. "You might think that" Madam Professor replied. "Well that's what he's doing, what would you call it?" "He's creating a fresh concept" Madam Professor replied "Construction arises out of the ashes of destruction." "Does it?" I asked. "You obviously don't agree...." I looked about the seminar "Well what about her, what's she doing?" "Who?" Madam Professor asked turning round "The woman over there standing on her head." "Oh, she's developing a new perspective." "Is she?" "Yes." "If you say so. Well what about him?" I said pointing the man asleep in a chair. "He's asleep. The mind learns only when it wants to" was Madam Professor's response. "Does your husband believe that?" "It’s self-evident surely. What's your subject?" "I don't have one, I'm a writer" I told her. "Well what are you looking for?" she asked. "As a writer - the truth. As myself, I'm looking for what we are all looking for. "And what might that be?" I looked over towards a man busy sketching "Ask that gentleman, he thinks he has all the answers. You just might find him interesting." Madam looked at the man busy sketching "Why, who is he?" "Number Six" I told her.
All told I found it easy to leave the art seminar, and easy to see how Madam Professor can see one thing, where the rest of us see something else. I suppose its all a matter of interpretation. Yet the citizens here in the Village, do not go short of culture, and those with an artistic bent can put it to good use, which in turn helps keep the good citizens of this community amused and out of trouble. Sadly that cannot be said of Number Six!
*
Just A Miniute!

The bloke in the blue piped blazer and straw boater - isn't that the chess champion No.14 as seen in the episode of Checkmate? Okay, we never see the chaps face at the Arts Seminar of The General, but it's a nice thought to think that it might be he.
*
No.73 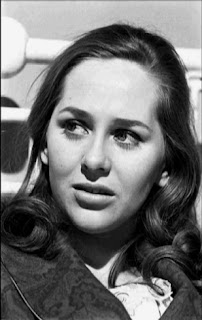 They say that no matter where you go, no matter what you do, they will catch up with you sooner or later. Well it seems that No.73's husband is doing well in avoiding being abducted to the village. Because having failed to find him, they have brought this poor woman to the village instead, in an attmept to get her, No.73, to betray her husband by telling them where he is.
But hang on a minute! They do know where he is, or at least where he was.... with that woman Marya, what's more they have photographic evidence! It just goes to show that the village's administration is not as infallible as they would like themselves to be.