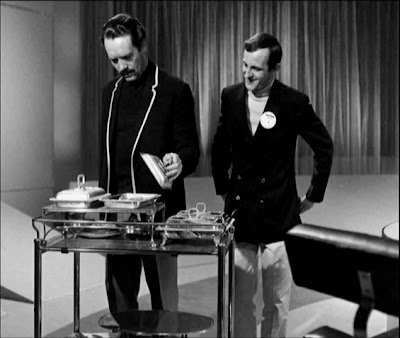 During the episode of The Schizoid Man, No.6 is conditioned to be left-handed, to smoke black Russian cigarettes, and that flapjacks are his favourite dish. Later, after No.6 wakes up in a strange apartment, there is a telephone call from No.2, resulting in No.6 going to the Green Dome for debriefing, and breakfast.
On the menu are flapjacks {pancakes really, as flapjacks are actually biscuits}. So if No.6 has been conditioned to eat flapjacks on sight, why doesn't he do so for breakfast while in No.2's office? Ah, perhaps the answer is in the question, No.6 is offered pancakes for breakfast, that's why he take but a nibble of said dish!

I'll be seeing you
Posted by David Stimpson at 08:43