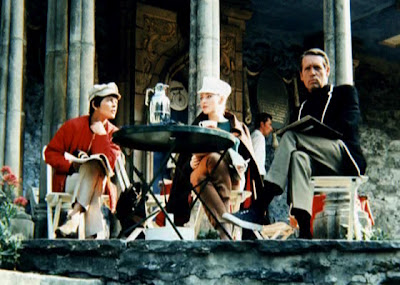 Mary Morris "He's a bit pretentious don't you think?"
Norma West "I like him, he has possibilities"
Mary "We're not here to discuss whether we like him or not, only the possibilities of his proposal. What do you think Patrick?"
Patrick McGoohan "It won't work. The general public won't go for it.!"
Norma "Well I'd like to hear further about this project."
Mary "Oh alright. Where did we get to?
Dave "Well an agent has resigned his highly top secret and confidential job, and has been abducted by a pair of Undertakers to a place called the Village."
Mary "Do we know why he resigned?"
Dave "No, well yes, well find out in a later episode."
Patrick "How may episodes are there to this television series?"
Dave "As many as you like."
Mary "Twenty-six?"
Dave "Yes, as many as you like."
Norma "Thirty-six?"
Dave "Anything you like."
Norma "And he spends his time trying to escape?"
Dave "Yes."
Mary "And finding out who Number One is?"
Dave "Yes, as well as poking his nose is where it's not wanted."
Patrick "What about torture?"
Mary "Well there's bound to be torture isn't there, they want to know why he resigned."
Patrick "Drugs, hidden meassages?"
Dave "Yes, drugs are used throughout the series, but no hidden messages."
Patrick  "Sex?"
Dave "Yes, anything you like."
Patrick "We don't want sex."
Norma "You speak for yourself Patrick!"
Mary "Well we have to decide whether or not we like the script. Personally I'm willing to give it a go."
Norma "Well I think it's got potential."
Patrick "The general public won't go for it. He'll be attacked in the street, sworn at in Public Houses, ridiculed for the rest of his life, I'm in!"
Posted by David Stimpson at 08:33