I would say imagine the scene in ‘Fall Out’ as the order to evacuate The Village is given, but we do not have to imagine it as we can see the evacuation for ourselves. Helicopters taking off from all corners of The Village, Mini-Mokes racing through the streets, and across the beach. People running to get away, well that’s what it appears to look like. 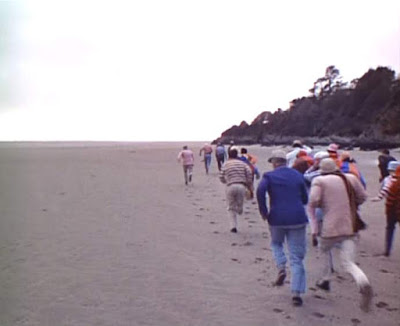 We know what these people are doing, they are running along the beach away from The Village not in an evacuation, but in pursuit of the Professor. And next there is one group of people running passed that awful grassy bank on the way to 6 Private as seen both ‘It’s Your Funeral’ and ‘A Change of Mind,’ and here it is again. 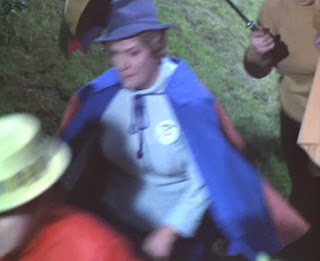 And there is Number 56 from ‘A Change of Mind,’ amid that group of people, not running during the evacuation, but hurrying to 6 Private in order to attack Number 6 then to manhandle him to the hospital! Such is the penalty of the over reliance of film stock footage. Unless of course Number 56 being caught up in the evacuation just happened to get herself caught on camera!