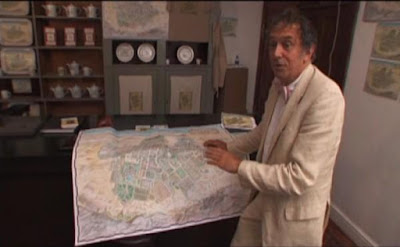 Production Designer for THEPRIS6 - Michael Pickwoad who has died at the age of 73. 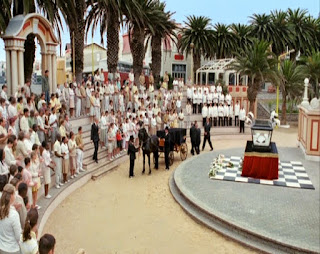 “The chessboard!﻿ In the original series of 'the Prisoner,' there is a great play on the game of chess. So what The Village needs is a chessboard, and chess has a great formality, it has a sense of organisation and logic, and you think someone is pulling the strings somewhere when you see the size of the chessboard that people can stand on. And it is as though, with the chessboard in the above picture, that it is another working of the same dream, but many years on, somehow forgotten in the mists of time.” Such is the idea of the production designer for THEPRIS6.
Michael pictured above in the Village Shop, explained about the Map of The Village. “The shopkeeper, in the Village Shop was always keen to sell his customer maps of The Village, "buy one, get one free. Makes the perfect gift!" But that would have been rather dull, so the set was dressed with a variety of items, and upon which The Village Map was printed, on cups and saucers, plates and trays. Aprons, mugs, tea pots, and 'T' shirts, in that way you always know where you are in the Village!
The Village map itself is loosely based on the street plan of the city of , in the , and was drawn by Michael Pickwoad over several weeks. It’s a very childish map, which doesn't actually tell you anything, because in The Village you're not supposed to know anything!”
As for the "old man - 93" according to Michael Pickwoad, “He is a representation of the former No.6.” And he should know from having worked on the series.

Rest In Peace Michael
Posted by David Stimpson at 15:08