There are a number of men of mystery in ‘the Prisoner,’ those who we know very little, or absolutely nothing about. I do not count the Prisoner as such a man of mystery, because at least we know him by his code name ZM73, or as Peter Smith which does give him a name of sorts. We know he once had a job which he considered to be top secret and above the law, and confidential. He may have worked on Her Majesties Secret Service. British Military Intelligence MI9! We won’t bother with ‘A’ I never liked the man, and to know that he made world news a few years ago by defecting is quite enough!
But there is our diminutive friend the . We know absolutely nothing about him, not even how or why he came to The Village. He
therefore is a true man of mystery.
Then we come to this man. 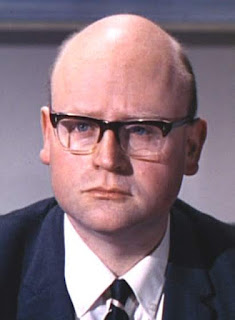 I have always seen this man to be a petty bureaucrat. A sort of front man, a receptionist, seeing as he is little involved, except during the opening sequence, a role repeated in the episode ‘Many Happy Returns.’ He must have a name, if only a code name like PR12, ZM73, XB4, D6 and XO4. Mind you after this man moved on his position was eventually filled by Jonathon Peregrine Danvers, promoted from the typing pool. doesn’t appear to have a code name, as his superior PR12 uses own name, perhaps he’s not important enough to warrant a code name!
‘M’ is used as a title, an initial for the chap, or indeed woman, in charge. ‘M’ is James Bond’s immediate superior. And John Steed’s superior is ‘M’ for Mother in ‘The Avengers.’ Are we therefore looking at another ‘M?’ ‘M’ in conjunction with a number perhaps, Like M2 in THEPRIS6! 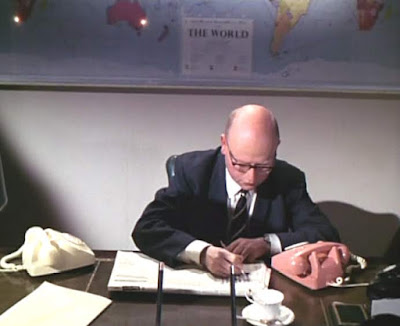 Whoever this man is I don’t think he’s that important in the chain of command. Yes ZM73 did hand his letter of resignation to him, and he did report to him first having returned to . But that was all, because then ZM73 went on a trip into the country in order to make his report in person to the Colonel.
And this “receptionist” doesn’t seem to have that much to do, seen here doing the crossword puzzle in a newspaper. But perhaps it’s the man’s tea break, there is a cup and saucer on the desk. Mind you there’s no tea plate, which is an indication that there were no biscuits to go with his tea this time!
It rather looks like he’s waiting, perhaps filling in the crossword while he waits for an important telephone call seeing as the pink telephone is the closer one to hand. But who would be calling this bureaucrat on a pink telephone? It can’t be the hotline to No.1, no not that No.1, I mean the boss, the Colonel or Sir Charles Portland. But then again “hot line” telephones are usually red, and this one’s pink, why pink? That could be left to interpretation! Because for a long time
pink was the colour of choice for young boys. It was only surprisingly recently that it was seen as a feminine colour. And yet “In the early part of the 20th Century and the late part of the 19th Century, in particular, there were regular comments advising mothers that if you want your boy to grow up masculine, dress him in a masculine colour like pink and if you want your girl to grow up feminine dress her in a feminine colour like blue."