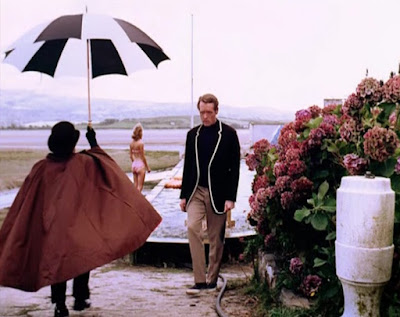 The above image has been taken from the “alternative” Arrival, just after we see the Alouette helicopter standing on the lawn by the sea wall. Rover can be seen on the other side of the helicopter, on patrol, guarding said helicopter as part of the alarm system, also there is the Butler. In the scene the Butler’s umbrella can be seen just above the Rhododendrons as Number 6 approaches by the swimming pool. I wouldn’t be inclined to ask the Butler why he wears his cloak inside out, but what was he doing by the helicopter with Rover? But as the Butler piloted the helicopter earlier in the episode perhaps he was making some safety checks. But then that would presuppose that he, like the approaching Number 6, also has an Electro Pass to synchronise with the alarm system. Otherwise the Butler should have been attacked by Rover!