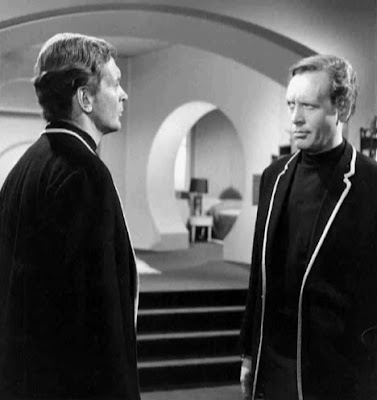 “What are you looking at me like that for?”
“There’s something not quite right here.”
“How do you mean?”
“Well I’ve a feeling that it’s all arse about face!”
“Well we’re both wearing the same coloured blazer.”
“No, it’s not that.”
“What then?
“It’s you, you don’t look like me.”
“Well there is a resemblance between us, after all I am supposed to be you!”
“No it’s even more than you...........it’s this cottage!”
“What about it?”
“Well don’t you see, it’s all the wrong way round!”
“The wrong way round?”
“The cottage is mirrored!
“It looks alright to me.”
“When you came in here you came in through that door.”
“The door to my cottage, yes.”
“But it’s on the wrong side, it should be over there.”
“Look I don’t know what game you’re playing.........”
“Game, yes just what game is Number Two playing now?”
“Look just who are you?”
“I’m Number Six.”
“You can’t be, I’m Number Six.”
Well they both couldn’t be Number 6, or could they? Number 6 claimed to have woken up in a strange apartment. When he went out into The Village looking for what he thought to be his cottage of ‘6 Private’ he soon discovered that something was seriously wrong. Both the Town Hall and Number 2’s residence, the Green Dome, were on the wrong sides of The Village. So was the Cafe, the General Store, and of course ‘6 Private.’ The truth of the matter is The Village Number 6 now inhabited was a mirrored effect of The Village he had known. How he came to be there he could not explain. At first he thought it was one of Number 2’s little games. If that was the case, how was it possible for The Village to be the exact opposite to what it had been, unless there were two Villages, the one the mirror of the other. Certainly having two Number 6’s in The Village gave Number 2 a headache, as he had no way of explaining the existence of this second 6. Yes they bore a slight mirrored resemblance to one another. In fact it might be said that two times six, who we shall refer to as 12, was a far more perfect specimen for Number 6. How he came to be in The Village is unknown. He said he went to bed, and the next morning he woke up in a strange apartment....he was here, in The Village. True, people do turn up in The Village, people who know too much, or too little. People who have knowledge which is valuable to one side or another, information which needs protecting, or extracting. But these people are brought to The Village, they do not simple wake up in a strange apartment and find themselves here as though by magic. But then why not, after all this is the Twilight Zone, where in multi dimensional space mix ups do sometimes occur. People can become displaced, but when that happens the general rule is, that when a person does become displaced from the one dimension to another it equals itself out by sending a person’s doppelganger the other way. In effect they change places, they change dimensions, so that no two same persons can ever exist in the dame dimension at the same time. In this case it would seem that inter-dimensional physics have become disrupted, the effect being that the inter-dimensional equilibrium is out of kilter. In short, somewhere in the Twilight Zone there is a Village short of a Number 6!