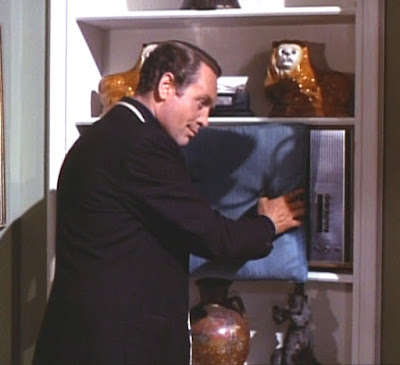 Putting a cushion to the television set is almost as subtle as putting the loudspeaker in the refrigerator that time during ‘The Chimes of Big Ben!’ Mind you I would like to have seen Number 6 rip out the television and trample it to bits underfoot as he did the loudspeaker that time. But then again Electrics would only have come along to replace the television.
Has anyone asked the question, what was it that attracted Number 6 to the television set in the first place? He obviously knew “they” were watching him, because when he took the cushion away from the screen he gave a little bow to those who were watching. How did he know? And what compelled him to cover the screen with that cushion in the first place? Was it simply to annoy those who were watching? Perhaps that was the only option open to him. He couldn’t really trample the television to pieces underfoot, as he had with the loud speaker, he would need a sledgehammer. And even if he had a sledgehammer, the tube inside would have exploded! Hang on a minute, a more subtle and simple way, would be to turn the television to face the wall. Ah, but that would have caused continuous electrical interference, that peculiar acoustic feedback! Another thing would be, to stand that gold screen he has by the door in front of the television!
Be seeing you
Posted by David Stimpson at 07:22