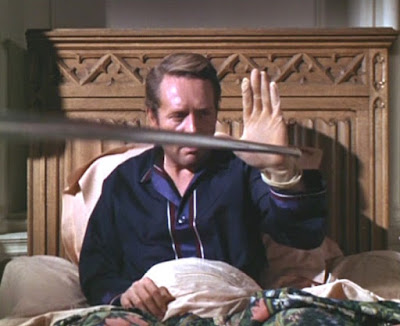 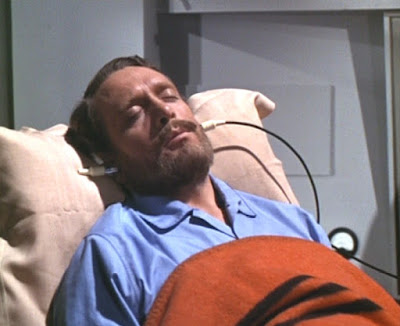 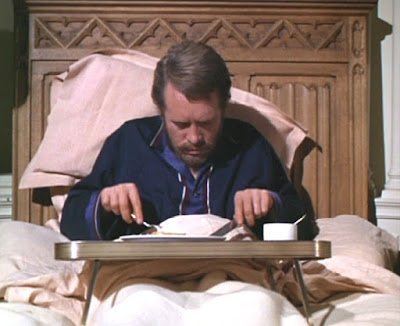 Having been taken from his cottage in the middle of the night, Number 6 was taken to the cottage of ’12 Private,’ where he spent a month undergoing certain conditioning in order to alter his appearance, the mole removed from his left wrist, his right-handedness to being left-handed. He doesn’t smoke cigars, he doesn’t smoke white cigarettes, he smokes black Russian cigarettes, flapjacks are his favourite dish. He rejects a plate of bacon and eggs, he has no taste for liver and bacon, but quickly tucks into a plate of pancakes. Just a minute, flapjacks are supposed to be his favourite dish, not pancakes! Flapjacks are a soft chewy biscuit normally in squares, whereas the pancakes Number 6 eats are made from milk, eggs and flour. But never mind that, it is but a small point. How is it that when Number 6 wakes up in ‘12 Private’ about a month later, he feels strange, different, he is certainly disorientated, he has absolutely no memory of what has happened to him? It isn’t until much later in the episode when Number 6 compares the bruise under his left index finger to the same in the Polaroid photograph that he realizes something is not quite right. He checks the date, then looking deep into the dressing table mirror things soon become clear to him, what has been done to him. Had all unpleasant memories of that conditioning which Number 6 underwent, been removed from or suppressed in someway in his memory without affecting the actual conditioning of his mind? It would appear so. However with the difference in the bruised fingernail, Number 6’s memories of having undergone a change in appearance, and the conditioning he underwent, returned to him. And this isn’t the only time Number 6 comes to realize the truth of his situation by looking deep into a mirror! 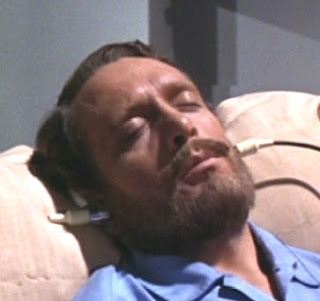 Just one final thing, when they were conditioning or brainwashing  Number 6s mind, why did the doctors attach those two electrodes to Number 6’s ears, instead of to his actual head as is usual with electrodes? What’s more one of the electrodes doesn’t have a wire…..now you can laugh! As my wife said, laughing out very loudly, perhaps it goes in one ear and out the other!!!