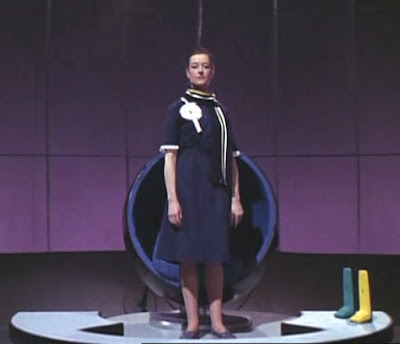 You’ve dropped your persona of Number 58 with her incomprehensible language. Her friendly charm and girlish behaviour, it was a fine performance. Who would have thought you were Number 2 all the time, as you stand there with a symbol of power wound about your neck. And you speak English perfectly. I take it you are English? I wonder what your term in office was like? What had you in store for Number 6, I bet it was something brutal. You look stern, severe, unfeeling, the dead opposite of your former persona, Number 58. Well at least you didn’t damage the tissue, you just saw to it that it was bruised a bit. I take it you arranged for the two motor mechanics to take out their revenge on Number 6 in that cave. You are a hard faced bitch, and that’s putting it plain! Don’t worry all will be satisfactory in the end, that’s what you told your predecessor said as he was departing from The Village. Well you haven’t been in The Village yourself for five minutes. You’ve a lot to understand about Number 6, he wasn’t ready to talk when he was brought before you. If you thought the information could be beaten out of him, you’ve another think coming!