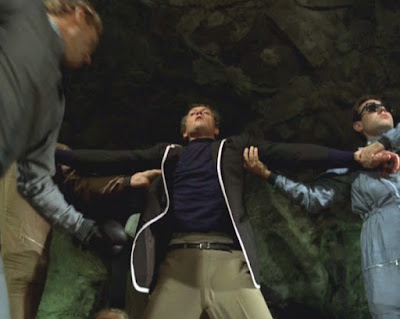 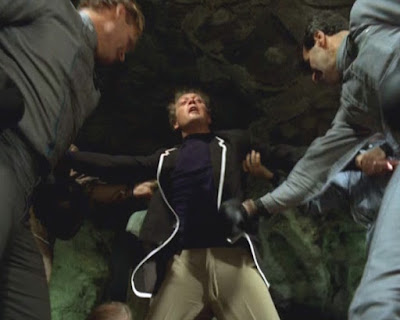 Having been slapped back to his senses, Number 6 stumbles through a steel door to find himself sprawling on the floor of a cave, perhaps the actual Therapy Zone. Having seen four men sat around a pulsating Guardian, he turns to leave, but his exit is blocked by the two motor mechanics. From then on a violent fight takes place, resulting in Number 6 being restrained by the four men who had been sat around the Guardian. Then the two motor mechanics set about giving Number 6 a thorough beating. But where did they get the boxing gloves, they didn’t have them with them when they came into the cave! The gloves must have been in the cave beforehand. I suppose this is just another example of how everything in ‘Free For All’ was all pre-arranged. Right from the prefabricated election placards to the new Number 2 waiting for Number 6 to be brought before her!