In this brief series we come to 6 of the best characters, who may have a large supporting role, or might appear only briefly, which excludes Number 6 and any Number 2. 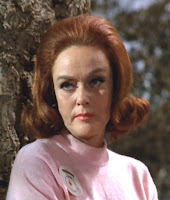 Number 8-Nadia Rakovsky {Chimes} Nadia arrives in The Village in the usual way, by helicopter. She is taken to her cottage, apparently unconscious, where she wakes up. Does she already know what her assignment is, or is she like the Colonel of ‘Do Not Forsake Me Oh My Darling,’ ignorant of why she has been sent to The Village until briefed by Number 2?
Number 8 isn’t really a citizen of The Village, she is a plant, and a very charming, and attractive woman. She is also very good at her job, playing the damsel in distress allows her to get close to Number 6. Her faked escape attempt must have been very distressful for her, as no amount of briefing about the Guardian could prepare Nadia for a very nasty experience! But in her attempt to escape The Village she did push herself to the limit. At the age of 17 she had been an Olympic bronze medallist, although that was a while ago, rough swimming meant she couldn’t swim so far!
Nadia carries out her part of the plan perfectly, during which she appeared to have some feelings for Number 6, although as she stands there on the steps of the Recreation Hall, she looks to be unfeeling, and looks down upon Number 6 with distain!
Of three external agents, herself, Curtis, and the Colonel, brought to The Village for various assignments, Nadia is the only one to survive the experience and be able to leave The Village.

2, The Supervisor-Number 26 is more than capable and is very efficient as he 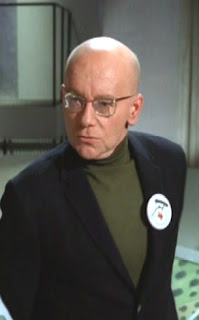 carries out his duties. In his domain of the Control Room he’s the boss, but shares shifts with other Supervisors. He rarely makes a mistake, when he did it’s because he was unaware that it wasn’t Number 6’s birthday, but for that he was relieved of his position, replaced by Number 60. But that was a mistake on the part of Number 2, and Number 26 was soon restored to his previous position. His only other mistake was a piece of improvisation, in that he saw that the door to Number 6’s cottage was left unlocked because he doesn’t always answer the door! Although his number suggests a lower ranking in the hierarchy of The Village he has a close relationship with Number 2, and only once is he seen out of the Control Room.
At one point in ‘Once Upon A time’ he is effectively promoted to the position of Number 2, The Village is all his for one week. After which in ‘Fall Out’ we see Number 26 is also a delegate of the Assembly who takes his place on one of the back benches, which makes Number 26 a more important citizen than first thought.

Number 14 {Hammer} he always tries to do his best and wants to be more of an assistant to Number 2 than he is allowed, but he does carry out orders without question. Yet he is badly treated by Number 2, perhaps he doesn’t trust Number 14 whose loyalty is beyond question. Although he does like to project an image of himself, such as the time he was dozing in an armchair in the foyer of the Green Dome. Suddenly he hears the pair of steel doors opening, jumps up out of the chair, adjusts his jacket and stands to attention. Thus giving the impression that he’s been standing there at attention, for quite some time.
He gives the impression of being a tough guy, he said he wanted to give Number 6 a dusting down, that he’d really enjoy it. Kosho, well he met his master that time, and was lucky to escape a dunking! And then he became angry! Number 6 had put the poison in, and Number 2 accused Number 14 of being a traitor and finished him! Number 14 no longer assistant to Number 2 stormed round to ‘6 Private’ to have it out with Number 6. There is a vicious brawl between the two men resulting in Number 14 being thrown out of the cottage through the French window, taking the balcony railings with him. It is not known what befell Number 14, whether he survived the fall, or if he broke his neck and died on the scene. Either way this is the last we see of Number 14. It would have been a nice touch had he survived to carry on his duties as assistant to the retiring Number 2 of ‘It’s Your Funeral’ for two reasons. Firstly, because Number 22 in ‘It’s Your Funeral’ not only dresses identically, but also bears a remarkable resemblance to Number 14. And secondly it’s Number 14 we see during that bout of Kosho in the same episode.

4, Number 12 {General} he is one of those dissidents he talks about, and has some anti professorial thoughts, that he’s a crank and should be treated as such, a troublemaker and attracts troublemakers. Much the same could be said of Number 12, who attracts Number 6 to him. On the beach he teaches him a lesson about Speedlearn, and hands over the Professor’s tape recorder. He commits an act of sabotage, and when Number 6 goes to Number 12’s office in administration the next day, he is supplied with the outfit of a Top Hat official to go with the two security pass discs. Number 12 is a traitor! And would have been confirmed as such had Number 6 not stepped in with his insoluble question for both man and machine. Did Number 12 die a brave death in trying to save the Professor’s life, or did he take what is laughingly called the easy way out? A noble thought to think it was the former, that he gave his life for the cause. Although he must have realized that he would not be insulated against the electricity shocking the Professor. Number 12, died a martyr or was he just another suicide!

Number 53-The Rook {Checkmate} has an independent mind, something which is frowned upon in The Village, and is a habit the doctor-Number 23 wants to break within him. So she uses an experiment adapted from Pavlov’s experiments with rats, no it was dogs. It is an experiment which leaves him fully compliant, and is the first of Number 6’s “reliable” men to be chosen. Except Number 53 still has the remnants of that independent mind, and it was while on the raft, transmitting that automatic distress call, that he must have got to thinking, and put to Number 6 his own test, and decided he is a guardian. And the best course of action he decided upon was to go back, tell the others, and release Number 2. It was a mistake.
Number 53 is an electrical engineer, with noble thoughts. He invented an electronic defence system, and thought all nations should have it, as he thought it would mean World peace. But the plans got stolen, some petty minded bureaucrat let his bag get swiped. Perhaps an agent working for The Village stole those plans, and that electronic defence system was amended slightly to become the Beam seen demonstrated in ‘Hammer Into Anvil,’

Number 22-Cathy {Harmony} who at the end wished it had been real, having allowed herself to become too involved. The reality being she was simply playing another damsel in distress, playing on The Man With No Name’s sympathies. Rather like Nadia during ‘The Chimes of Big Ben.’ In fact Cathy has something in common with Nadia, she was going to escape with a man they both appear to be attracted to.

It must have been awful for Cathy to experience her strangulation by the Kid, even in a virtual reality situation, or role playing if you prefer. And yet here is yet another case of life imitating art, as Number 8 strangles Number 22 with his bare hands!
This wasn’t an easy choice, in fact there are so many characters I could have chosen a completely different set of 6 characters 6 times over and more. In fact I kept changing my mind, but returned to the original 6 I first thought of. I had to draw the line somewhere, otherwise I would still be thinking about it!

Be seeing you
Posted by David Stimpson at 08:59