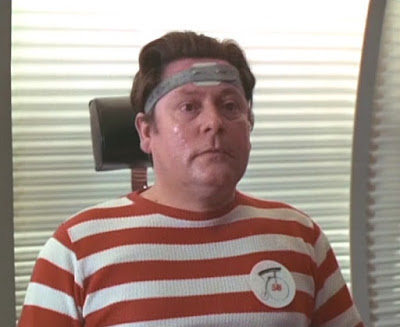 There are all kinds of uniforms in The Village, but have you observed how mostly the prisoners, such as Number 58, wear striped jerseys and the Guardians wear single coloured jerseys? This man is a prisoner who is undergoing aversion therapy treatment. In The Aversion Therapy Room he is strapped into a chair with electrodes attached to him, while on a screen a film is played, film of the white membranic Guardian, Number 2, and the single word unmutual and the patient is extremely excitable. He becomes very agitated by the images shown on the screen, the Guardian, Number 2, and the word unmutual. It might be imagined that aversion therapy is designed to help the patient get over his or her aversion to something. However, if that is the case why would doctors remove an aversion to something citizens are supposed to be afraid of, namely the Guardian and Number 2. He’s not supposed to be popular and liked by the citizens, although Number 2 in ‘The Chimes of Big Ben’ would appear to be an exception to that rule if the Arts and Crafts Exhibition is anything to go by. More likely the aversion therapy is designed to instil fear in the subject, to increase a patient’s aversion to something, or someone, hence the citizen’s reaction towards unmutuals. Through aversion therapy the citizens are turned into socially conscious citizens who are provoked by the loathsome presence of an unmutal.