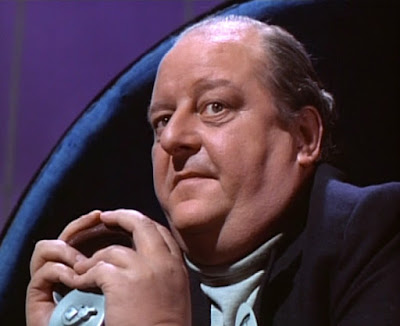 The current Number 2 of ‘A Change of Mind’ is most probably the worst of all them all, and you should not trust him as far as you can throw him. He may have a benevolent, beguiling charm but this is only a façade, behind that smile lurks a menacing character that makes your skin crawl, well it does mine! Such is the affect he has on the citizens that his image is used as part of the therapy treatment being conducted by doctors at the hospital.
In the Aversion Therapy Room people are treated for their aversions and phobias. One poor individual has a phobia of the Guardian as he becomes quite agitated and excitable at seeing the Guardian on the screen. At one point the letters and numbers of No.2 and unmutual appear on the screen, not to mention Number 2’s face. It’s understandable that citizens should be treated for their aversion to the Guardian as it’s something to be afraid of. But an aversion of Number 2....yes well in this particular case that’s understandable!
When Number 6 was at the hospital having undergone a medical, when he asked Number 46 if he had been in there, in the Aversion Therapy Room? Number 46 said that he had not been in there, he’s one of the lucky ones, having undergone the operation known as Instant Social Conversion, and he thinks that’s lucky. Perhaps he’s right, perhaps he is, it would all depend on how long patients spend at any one time in that room during any one session, and how many times a day! It just goes to show how much this current Number 6 is disliked, that doctors have to treat patients for their aversion to Number 2. Things in The Village have never been that bad before, some of the Number 2’s are quite likeable.