6 of The Most Detestable Characters!

Who do you consider to be the most detestable characters in ‘the Prisoner?’ I can think of a list as long as your arm, in reducing that number to 6, I arrived at the following.

The doctor-Number 40 {Dance of The Dead} clearly enjoys human experimentation, something he shares with Number 23 of ‘Checkmate’ in fact he could be her male counterpart! His method demonstrated at the outset of the episode may have always worked before, but clearly he hadn’t read Number 6’s personal file! But with Dutton he has a free hand in order to extract information from him. He realizes that everyman has his breaking point, but in his enthusiasm he goes too far, and leaves Dutton brain-dead! His methods might be efficient, but he fails to realize that there are other ways.
For the dance Number 40 has been given {because other people choose people’s costumes} the costume of Napoleon Bonaparte. Strange that someone {perhaps Number 2} would choose that particular costume for the doctor, as Napoleon is most commonly used by people suffering from delusions!

The doctor-Number 23 {Checkmate} the female counterpart of her predecessor Number 40, who relishes human experimentation, who goes further, adapting experiments carried out on animals to humans. Pavlov’s experiments with dogs for one, and another with Dolphins. Like her predecessor she realizes that everyman has his breaking point, and should like to know what Number 6’s is. She would go further, by suggesting a leucotomy be carried out on Number 6 in order to stem his aggressive tendencies, by isolation of the aggressive frontal lobes of the brain. 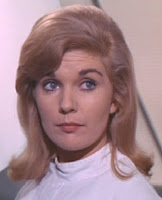 The doctor-Number 86 {A Change of Mind} although Number 6 was a special case, this attractive woman happily carries out leucotomy operations on patients with a smile. Not by the once usual method, but has a much cleaner and humane way, by use of ultrasonic sound waves. 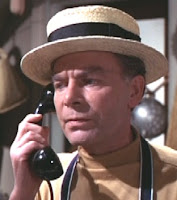 The Shopkeeper No.112 {Hammer Into Anvil} he’s a guardian! This weasel, this informant, watches and reports Number 6’s unusual activity in his shop. In fact at one point he cannot wait to go running off to Number 2 himself, regarding Number 6’s recent activity. But what he doesn’t know is, Number 6 is playing him for a fool! However he has brought about change to the General Store, bringing special imports, and a record booth, so you can listen to a record before buying.


5 Number 56 {A Change of Mind} this stout, loud, brash, forceful woman would make it to

Chairwoman on any committee! For the moment she is chairman of the ladies Sub-Appeal Committee, and this foul, bitter, and twisted woman doesn’t give Number 6 an inch! She doesn’t hang around long enough to see any contrition in Number 6. She seems pleased when Number 6 keeps refusing the offer of help, so be it, there remains only once course open to them. And when it comes to the time of the procession this woman is vicious in the way she brandishes her umbrella like a lethal weapon. Judging by the expression on her face, and the way she attacks Number 6 with her umbrella she means it, she hates Number 6! 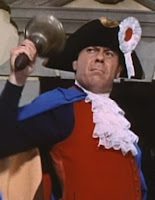 Town Crier/Nero {Dance of The Dead} according to the proclamation there will be music, dancing, happiness all at the carnival, by order. Later he appears as Emperor Nero, one of the three judges at the Prisoner’s trial. He reads out the charge against the Prisoner like he read out the proclamation about Carnival. He seems to take delight in telling the Prisoner, when he demands to call a character witness, that names are not used in The Village. Well that’s quite right, only names are used more times that Nero might imagine! But after further deliberations it is up to Nero to give the death penalty.
Footnote: But unlike the real Nero this one didn’t “play the fiddle” while The Village burned. Meaning to occupy oneself with unimportant matters and neglect priorities during a crisis. Besides which there was no fiddle {violin} in first century Rome, if Nero played anything it was the lyre!

Such is my personal selection. However it would be easy for me to put my mind to it again, and arrive at another and altogether different listing!