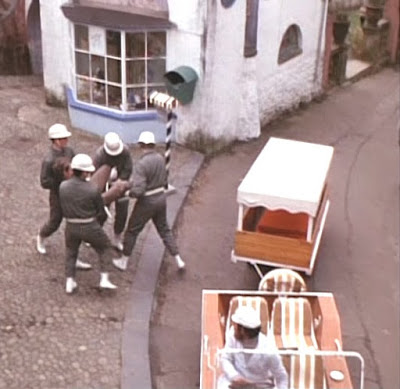 This is Number 6 being abducted from his home in ‘Do Not Forsake Me Oh My Darling.’ It would appear that this episode lacks the finesse of its predecessors. Before, Number 6 was heavily sedated, then medics came for him in the night whilst he was unconscious. But now there seems little time for all that, and they are resorting to good old fashioned brute force, which under certain circumstances can be very effective!
So instead of sending two medics and a nurse, they sent a hospital orderly and four security guards to manhandle Number 6 out of his cottage and into the Red Cross trailer. Symbolically I suppose the security guards represent undertakers, and the Mini-moke and Red Cross trailer for the hearse. Only there are four guards instead of two undertakers.

Be seeing you
Posted by David Stimpson at 08:51