In the Prisoner badges can be peculiar things at time. In ‘Arrival’ 3 people 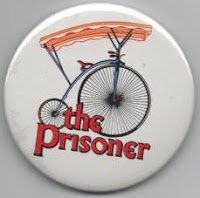 wear the same numbered badge, and two of them are ex-Admirals! And there are a number of people who do not wear their numbered badge, No.6 is the stand out candidate for this. The only time No.6 wears his is for a few moments outside the hospital, and in ‘The Schizoid Man’ but that’s only when he’s impersonating himself as Curtis! And then there’s the , he doesn’t wear a badge either, and he’s allowed to wear his own clothes. But I expect that’s simply due to his status as No.2’s personal gentleman’s gentleman, which is odd really seeing as he follows blindly and without question. The doctor who carries out No.6’s medical in ‘Arrival’ also fails to wear his badge, although in his case I suspect he merely forgot to pin a badge to his white coat, its probably still on his desk, or in a drawer! 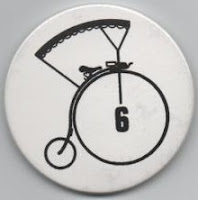 The Professor and Madam Professor are two other citizens of the village not to wear their respective badges. Although to call them citizens of the village would be stretching a point, because they are never seen out and about the village, but confined to their house. Except when the Professor was at the hospital undergoing therapy, and that time he went running off along the beach only to be manhandled back to the village by a number of his students. Why did the Professor try to run away? I suspect he was going to meet No.12 in order to give him his tape recorder with that message about destroying the General. But he was being hounded, and only had time to bury the tape recorder in the sand. No.12 saw him, but No.6 found the tape recorder first, and he in turn had to go back for it at night. But this time No.12 got to it first!  So I suspect that not being allowed to go out and about the village would be reason enough for them not to need numbered badges of any kind.
And the badges themselves, a black Penny Farthing on a white background, or white on a black background gives them a “positive” and “negative” identification, that’s why I should have thought that those working for the village would have worn the positive badge, and prisoners the negative. But then that would have made identification between the prisoners and the warders all too easy. But no matter what colour the badge there is one consistency the red of the numeral upon the badge. And yet curiously, and I’ve met no-one who is able to explain why the number on Mrs. Butterworth’s badge is white and not red! Also Mrs. Butterworth stands out for two other reasons. First she is the only No.2 to wear the negative badge, and secondly she is allowed to wear her own clothes, the diamond patterned dress which she wore in . But on the other hand perhaps she, like No.6, had only recently arrived in the village, and had not had time to change out of her dress and into village attire. 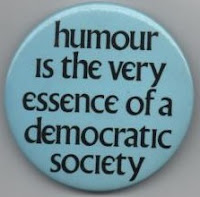 A well used number in the village is eight but it isn’t until ‘Living In Harmony’ comes along the number 8 is allocated to the Kid! Before, the number 8 has always been a female orientated number, perhaps because of its shape reflecting the shapely form of a woman! There are some observations to be made about the number 8 badge, because one morning during ‘The Chimes of Big Ben;’ Nadia must have been in a hurry dressing, because she pinned the badge to her jumper upside down! There must also have been a shortage of ‘8’ badges, as the ones worn by Rosalie Crutchley ‘Checkmate’ and  Wanda Ventham in ‘It’s Your Funeral’ were amended slightly. Having been a previous number, digit or digits had been tipp-ex’d out in order to create two different 8 badges. And even these two 8 badges are different from each other, as one has the numeral 8 over the front fork of the Penny Farthing, the other is off centre!

I have a modest collection of Prisoner related badges which I have collected over the years from one source or another, and some date back to the early 1980’s. The only numbered badges I have collected are 6, 2 and 1. Others bear just the village logo, or display different phrases proclaiming “I am not a number I am a free man,” and asking the question “Who is Number One?” as well as protesting that “I will not be pushed, filed, stamped, indexed, briefed, de-briefed, or numbered,” which of course the Prisoner was, despite his own show of defiance. All of these badges came in a variety of colours. Other badges relate to Six of One: the Prisoner Appreciation Society which I used to wear with pride once upon a
time, and came in four different colours. I even have a Le Rodeur of the French contingent of Six of One, although rust is showing through it now. While other badges celebrate the various important anniversaries of the Prisoner but always using the same basic design. 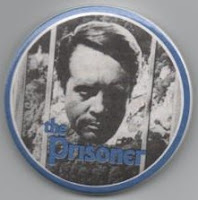 Do I wear any of these badges now?  On occasion, but really only the Prisoner pin badges, I think there does come a time when one does stop wearing such badges generally, seeing as they are more fitting to Prisoner related events. It also probably has something to do with age. But I do still wear my Prisoner piped blazer. Well they are bang on trend for both men and women, having been in fashion for the past few years now.