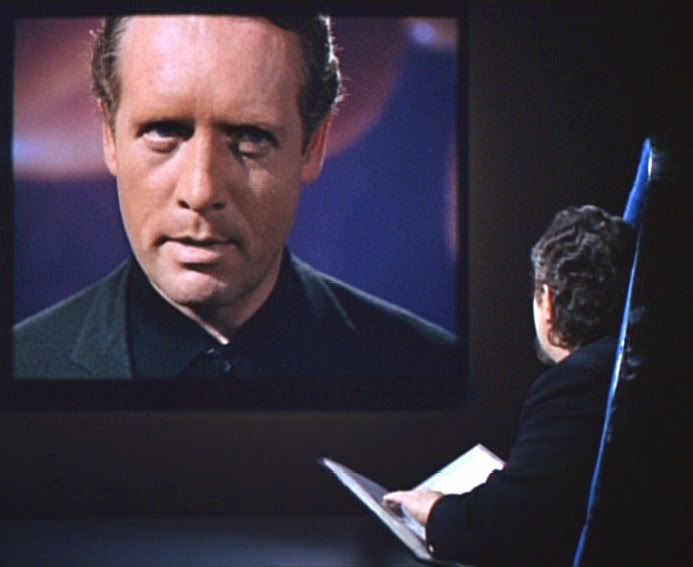 In ‘Once Upon A Time’ Number 2 is going through Number 6’s progress report file, since the Prisoner’s arrival in The Village. The action is displayed on the screen from the Department of Visual Records. It’s like a recap of the Prisoner’s progress, from smashing the loudspeaker, to his first attempt to escape. His vow to escape, escape and go back, to obliterate The Village, wipe it off the face of the Earth, and Number 2 with it. His first election speech when he said he was going to discover who are the prisoners, and who the warders. And when he stood before the members of the local Town Council, those brainwashed imbeciles! And at the ball, when Number 6 wanted to call a character witness in his favour. For Number 2 it was a progress report on Number 6, for the television viewer, I felt it was a re-cap of ‘the Prisoner’ so far.
Of course this is the second time such a re-cap had taken place. The first time was during ‘Do Not Forsake Me Oh My Darling.’ Although then it was when the Colonel/Number 6 was looking into the mirror  as though he is remembering past experiences in The Village. Which is strange because all unpleasant memories of The Village were supposed to have been wiped from Number 6’s memory, his mind regressed back to the day he was to have handed in his letter of resignation. Even stranger, that Number 6 could recall to mind so easily those erased memories!
And yet this is not the first time Number 6 has gazed deep into a mirror and seen the truth. The first time was in ‘The Schizoid Man,’ as he remembered what they had done to him, his change of appearance, the conditioning of his mind, to wake up in an apartment as someone else!